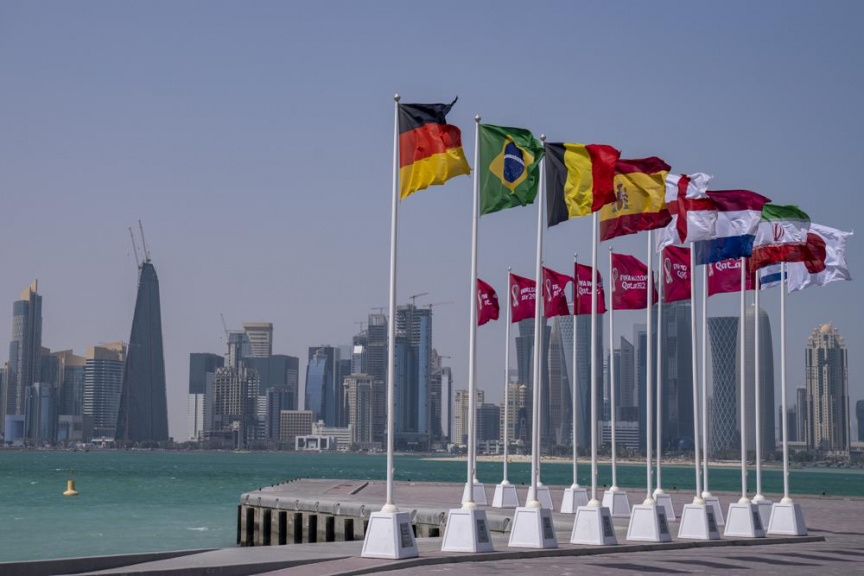 Flags of some of the qualified countries of the World Cup wave at the seafront in Doha, Qatar, Tuesday, March 29, 2022. The draw for the World Cup will be held in Doha on April 1. (AP Photo/Darko Bandic)

The Americans, who failed to qualify for the last World Cup, will be in Pot 2 after being ranked 15th in the world.

Canada, which won the North American qualifying group and will play at the tournament for the first time in 36 years, missed a chance for a rankings boost by losing at Panama 1-0 in its final qualifier.

Instead, Canada will be among the lowest seeded teams in Pot 4.

The eight groups for the tournament in Qatar will be drawn Friday from four pots.

Qatar gets the top-seeded slot given to the World Cup host nation despite being ranked No. 51.

Brazil took over as the No. 1 team from Belgium, the first change as the top in three years. Sixth-ranked Italy is the only team from the top 10 that failed to qualify.

Three of the 32 entries are still unknown because qualifying hasn’t been completed. Those three entries have all been placed in Pot 4 regardless of the rankings of the teams involved. No. 18 Wales is the highest-ranked of the eight teams left in the playoffs.

The rest of Pot 4 includes Cameroon Ecuador, Saudi Arabia and Ghana along with Canada.

Teams from the same continent will be placed in different groups, except for some Europeans.

Europe has 13 teams in the tournament and five of the eight groups will each get two teams from the continent. The other three groups each get one European team.

Qatar will kick off its home World Cup in the opening game of Group A on Nov. 21. The final is scheduled for Dec. 18 — the host’s National Day.