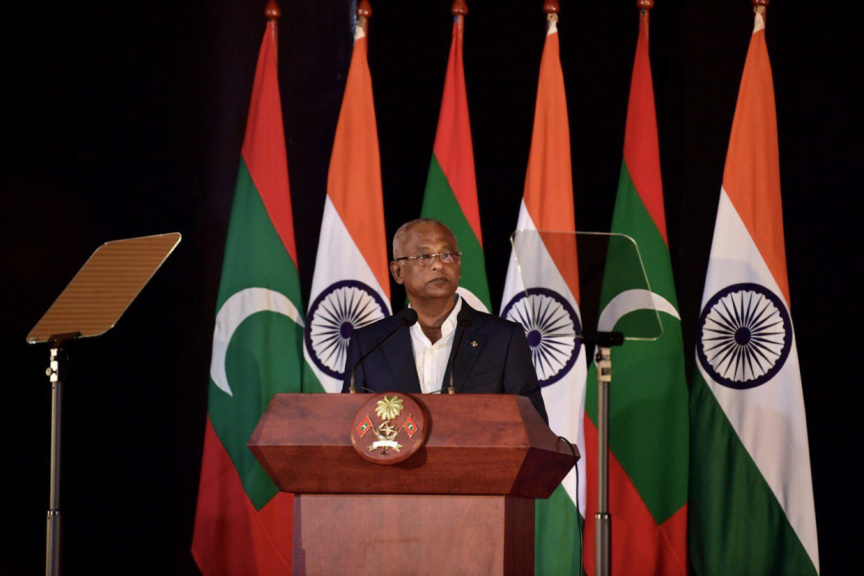 President Ibrahim Mohamed Solih has expressed gratitude towards India and former presidents for their contribution in the development of Addu Police College.

The India-funded ‘National College of Policing and Law Enforcement' was inaugurated on Sunday morning.

Speaking at the inauguration ceremony, President Solih thanked the prime minister, government and people of India for their generous assistance. He added that such projects are a representation of the close ties maintained between Maldives and India.

On this note, he pointed out some major projects which received India’s funding such as Indira Gandhi Memorial Hospital, Maldives National University’s Faculty of Tourism and Hospitality Studies, establishment of water and sewerage systems at 34 islands, Thilamale’ bridge, Gan International Airport and Addu land reclamation.

He added that India has been providing assistance to the Maldives throughout the years without consideration of who is heading the government.

“Indian has been assisting Maldivians without looking at who is in the government or what party is governing at the time – for the development of this country and its citizens. The National College of Policing and Law Enforcement inaugurated today is an example of this,” he had said.

Pointing out that talks regarding Addu Police College was initiated in 2009, following which work on it had commenced – President Solih had extended gratitude for former presidents upon the successful completion of the project.

Underscoring that India had provided grant assistance of MVR 300 million for the development of the Police College, President Solih stressed that the facility will play a key role in improving the services of Maldives Police Service.

The Police College was developed for the purpose of training individuals in security and law enforcement areas. Around USD 40 million to USD 42 million was spent on the development of this facility.

Agreement pertaining to the Police College was signed in 2012. The project was officially announced in 2014. The project was awarded to a contractor to be completed in 18 months in 2016. However, physical works on the project only commenced in 2017.