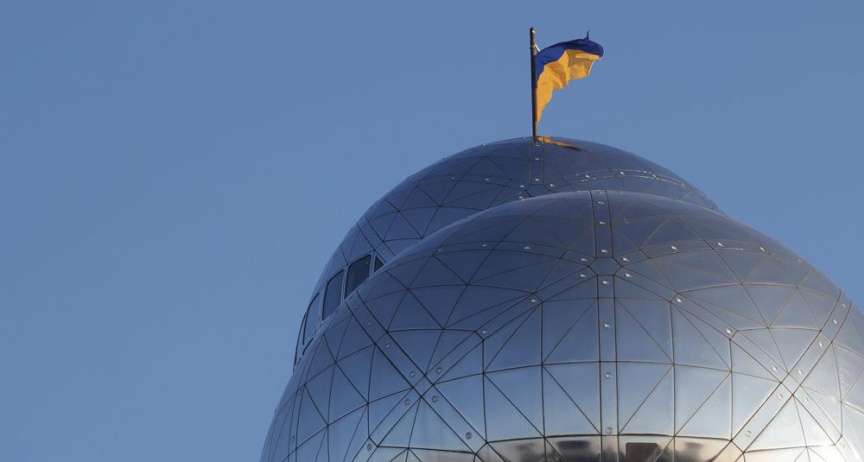 The Ukrainian flag flaps in the wind atop the Atomium landmark during a fundraising event for Ukraine in Brussels, Thursday, March 10, 2022. (AP Photo/Olivier Matthys)

New European Union sanctions against Russia on Tuesday sought to deny oligarchs their love of luxury and block Russia from cashing in on its lucrative steel exports. The United Kingdom also joined in the targeting.

The 27-nation bloc sought to stay away from sanctions that would sap its supply of Russian energy, but pounced with measures worth billions while stifling Russia’s ability to work on global markets by banning EU rating agencies from working with Russian clients.

“These new sanctions will cut Russia off even further and drain its resources to finance this barbaric war. So one can say that the Russia has become the most sanctioned nation in the world, which is very dubious honor,” European Commission Vice President Valdis Dombrovskis said.

The bloc’s continued punishment of Moscow for its invasion of neighboring Ukraine was done in close consultation with Western allies, from the U.K. to the United States.

Together they agreed to deny Russia the status of most favored nation, which will cost its companies privileged status in Western economies. Britain announced sanctions against 350 individuals and entities Tuesday and also promised to ban the export of luxury goods to Russia.

Furthermore, Britain will impose additional import tariffs of 35% on Russian and Belarusian products ranging from vodka and white fish to iron, oil seeds and grain.

The measures “will further isolate the Russian economy from global trade, ensuring it does not benefit from the rules-based international system it does not respect,” U.K. Treasury chief Rishi Sunak said.

Russia also imposed some sanctions of its own, putting U.S. President Joe Biden, Secretary of State Antony Blinken, Secretary of Defense Lloyd Austin and other top Biden administration officials on their own list. The White House downplayed the effects of that move.

“None of us are planning tourist trips to Russia and none of us have bank accounts that we won’t be able to access. So we will forge ahead,” said White House press secretary Jen Psaki.

The European Union has already hit about 600 Russians during four rounds of sanctions, including 15 individuals and nine entities in the fourth package. It affected one oligarch already targeted by Britain — Chelsea soccer club owner Roman Abramovich, who was slapped with an asset freeze and a travel ban.

The EU’s official journal said that Abramovich “has had privileged access to the (Russian) president, and has maintained very good relations with him. This connection with the Russian leader helped him to maintain his considerable wealth.”

Tuesday’s list of 15 individuals sanctioned by the EU also included Konstantin Lvovich Ernst, the chief executive of Russia’s state-run Channel One, which the EU says is used by Russian President Vladimir Putin for propaganda purposes.

The EU announcements were in line with what leaders had announced at the Versailles summit last Friday — that a stringent package of sanctions would be upcoming if Russia continued its invasion of Ukraine. And the EU insisted that the measures already had an impact.

“We see that ruble has crashed. Trading on the Moscow Stock Exchange remains suspended. Russia’s credit rating has been downgraded to junk status just about default levels. Many international companies are leaving the country,” Dombrovskis said.

The import ban on steel products amounts to some 3.3 billion euros ($3.6 billion) in lost exports for Russia, as the EU was its No. 1 market.

This time special attention was paid to the elite by targeting luxury goods. It ranged from truffles, Champagne, cigars and perfumes to fine wines, rare wristwatches, pearls and diamonds.

They also decided to exclude three Belarusian banks from SWIFT, the dominant system for global financial transactions, for that nation’s support of Russian military aggression.

But efforts by EU nations to agree upon an oil boycott against Russia are complicated, because some EU countries, including Germany and Italy, are much more dependent than others on Russian energy. Showing the wide range within the bloc, Poland gets 67% of its oil from Russia while Ireland receives only 5%.

Russian economy won’t be as it was, central banker says

Russia cuts off gas exports to Finland in symbolic move

Russia cuts off gas to 2 NATO nations to divide West