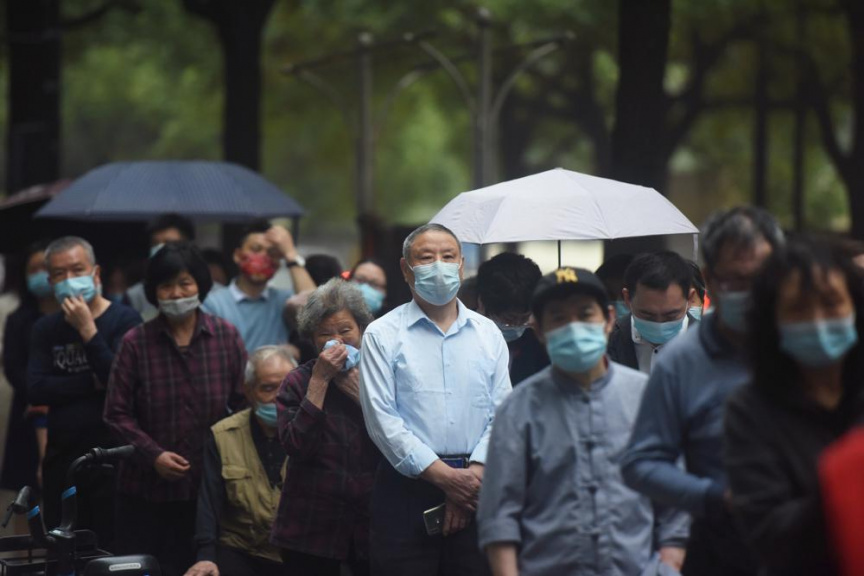 Residents line up for COVID-19 test in Hangzhou in eastern China's Zhejiang province Tuesday, March 15, 2022. China's new COVID-19 cases Tuesday more than doubled from the previous day as it faces by far its biggest outbreak since the early days of the pandemic. (Chinatopix via AP)

BEIJING (AP) — China’s new COVID-19 cases Tuesday more than doubled from the previous day as the country faces by far its biggest outbreak since the early days of the pandemic.

The National Health Commission said 3,507 new locally spread cases had been identified in the latest 24-hour period, up from 1,337 a day earlier.

A fast-spreading variant known as “stealth omicron” is testing China's zero-tolerance strategy, which had kept the virus at bay since the deadly initial outbreak in the city of Wuhan in early 2020. While the numbers are low compared to elsewhere in the world, the more than 10,000 cases China recorded in the first two weeks of March far exceed previous flare-ups.

No new deaths have been reported in the multiple outbreaks across China. Most of the new cases were in northeast China’s Jilin province, where 2,601 were reported. Smaller outbreaks have hit more than a dozen provinces and major cities including Beijing, Shanghai and Shenzhen.

Jilin has barred residents from leaving the province and from travelling between cities within it. The 9 million residents of Changchun, the provincial capital and an auto manufacturing hub, have been locked down since Friday as authorities conduct repeated rounds of mass testing both there and in the city of Jilin.

More than 1,000 medical workers have been flown in from other provinces along with pandemic response supplies, and the province has mobilized 7,000 military reservists to help with the response.

Elsewhere in China, Shandong province had the most new cases with 106. Guangdong province in the southeast, where the metropolis and major tech centre of Shenzhen has been locked down since Sunday, reported 48 new cases. Shanghai had nine, and Beijing reported six.

Chinese spaceship with 3 aboard dock with space station