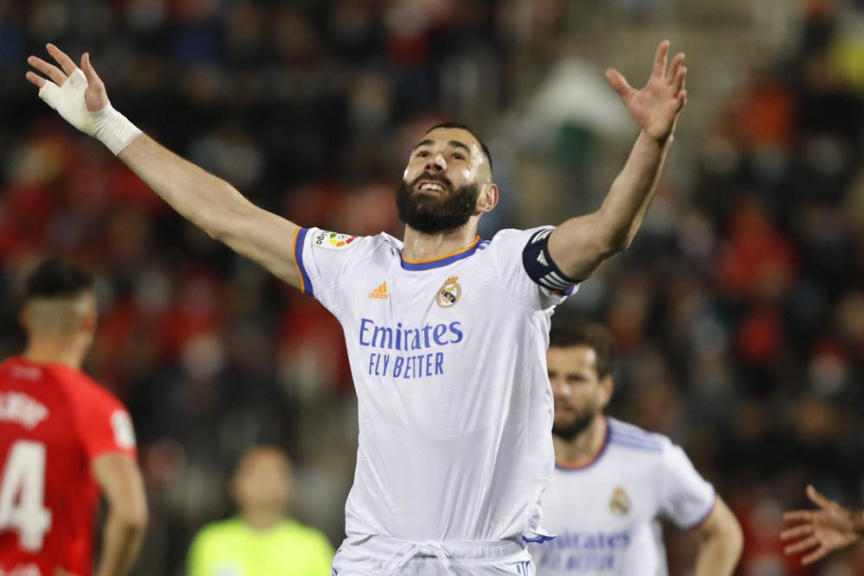 MADRID (AP) — Karim Benzema stayed hot as Real Madrid kept the momentum from its epic win over Paris Saint-Germain in the Champions League with a 3-0 victory at Mallorca to extend its Spanish league lead on Monday.

Benzema scored twice and set up Vinícius Júnior’s goal to help give Madrid a 10-point lead over second-placed Sevilla ahead of the clásico against Barcelona on Sunday at Santiago Bernabéu Stadium.

Benzema’s double came five days after he scored a hat trick in less than 20 minutes to lead Madrid to the Champions League quarterfinals with a stunning comeback win over PSG.

Benzema has eight goals in his last five matches in all competitions and comfortably leads the Spanish league’s scoring list with 22.

The match ended with concern over Benzema’s fitness, though, as the French striker had to leave a few minutes from the end with what appeared to be a left leg injury. Madrid, which had already made all five substitutions, also lost forward Rodrygo and left-back Ferland Mendy with injuries ahead of the match against Barcelona.

Madrid coach Carlo Ancelotti said it was too early to know the seriousness of their injuries.

Madrid has a 15-point advantage over third-placed Barcelona, which has a game in hand.

“It was important to win this match after our rivals lost points at the weekend,” Madrid midfielder Federico Valverde said.

It was the fourth straight league victory for Madrid, whose unbeaten run in the competition reached eight matches.

Mallorca has lost five in a row for its worst league streak since 2012. It sits in 16th place, two points above the relegation zone.

It was a rare Monday appearance for Madrid, which opened the scoring through Vinícius from close range in the 55th minute after a pass by Benzema. The Frenchman added to the lead by converting a penalty kick after a foul on Vinícius in the 77th and sealed the victory with a header in the 82nd off a cross by Marcelo.

Mallorca, which had most of the good scoring chances early on, has lost 10 of its last 12 league matches against Madrid.