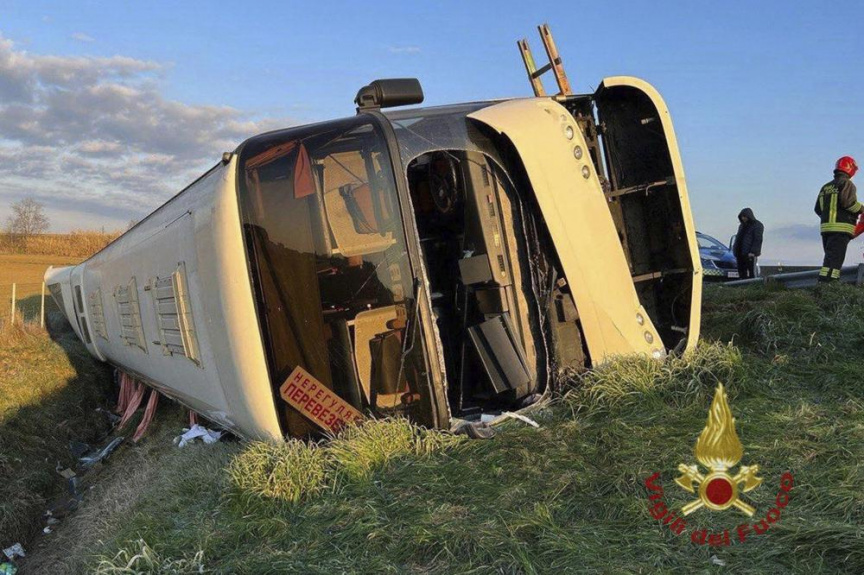 A bus lies on its side after overturning near Forli, Italy, Sunday, March 13, 2022. (Vigili del Fuoco via AP)

Italian state TV said there were also five people injured, but none of the injuries was serious, in the crash on the A14 highway near Forli’, a town in the Emilia-Romagna region in northeastern Italy. It said the rest of those aboard were safely evacuated.

The bus landed on its side on a grassy slope just beyond a highway guardrail and near a farm field. Firefighters used two cranes in an operation to set the bus upright and remove it after helping the survivors to get out of the bus.

The cause of the crash was under investigation. Highway Police official Andrea Biagioli said there were no skid marks.

“It could have been (the driver) suddenly falling asleep,″ Biagioli told state TV, stressing that in any case no cause had yet been determined.

Italy’s Interior Ministry said the bus had set out from Ukraine and was heading south to Pescara, an Adriatic port city, when it overturned. The passengers were taken to a nearby police barracks for initial assistance, and would later resume their journey, the ministry said.

The victim was a 32-year-old woman whose two children, ages 5 and 10, suffered bruises in the crash, the Italian news agency LaPresse said. Milan daily Corriere della Sera said the woman was crushed under the bus.

Earlier, firefighters had said there were about 50 refugees aboard the bus. But Corriere della Sera said that only 22 refugees had been aboard the bus that flipped on its side, while others were on a second bus that wasn’t involved in the crash.

The children were taken to a hospital where they were receiving psychological as well as medical assistance, LaPresse said.

The bus had been on the road for about 20 hours when it overturned, and had set out from western Ukraine, LaPresse said.

Around 35,000 Ukrainians refugees who fled after Russia launched war in their homeland have entered Italy, most of them through its northeastern border with Slovenia.

Forli’ is in the region of Emilia-Romagna, which borders the Adriatic Sea.

Newborn among 7 dead in landslide on Italian island

1 dead, up to 12 missing in landslide on Italian island

Footballer injured in knifing in Italy has back surgery