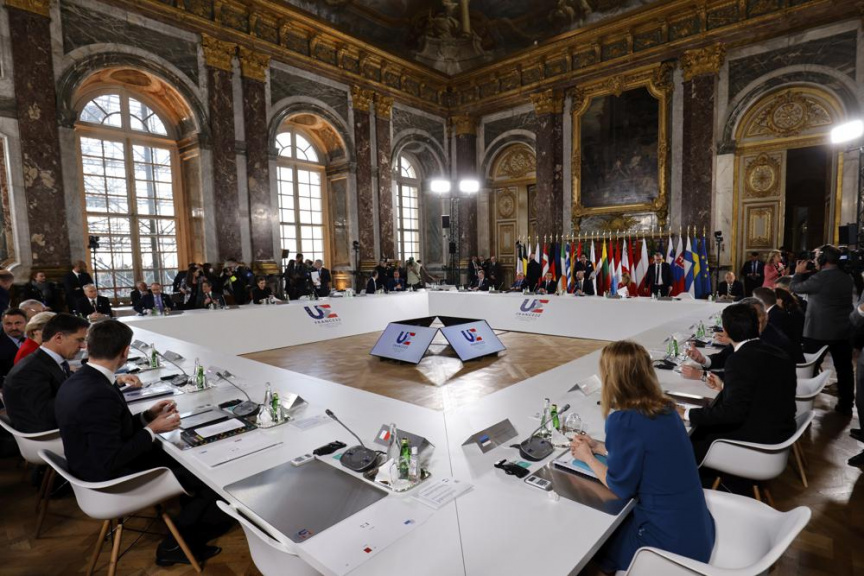 EU leaders attend a summit to discuss the fallout of Russia's invasion in Ukraine, at the Palace of Versailles, near Paris, Thursday, March 10, 2022. (Ludovic Marin, Pool via AP)

VERSAILLES, France (AP) — European Union leaders meeting in France Thursday ruled out fulfilling Ukraine’s demand for a fast-track integration with the bloc, as they discussed ways to help the eastern country that’s been invaded by neighboring Russia.

EU nations have been fully united in backing Ukraine’s resistance, adopting unprecedented economic sanctions against Russia, but leaders are divided on how fast Brussels could move to accept Ukraine as a member, and how swiftly the 27-nation bloc could sever energy ties with Moscow.

Ukrainian President Volodymyr Zelenskyy wants his country to quickly join the EU, but an agreement on that point won’t be achieved this week during the two-day summit hosted in the palace of Versailles west of Paris.

At best, EU leaders are expected to agree on language supportive of the Ukrainian bid to join the European family, but they will stop short of going further into the process.

The Ukrainian fast-track bid has received warm support in Eastern European countries, but EU officials have stressed the process could take years, with unanimity among current members required to allow a newcomer in the club.

French President Emmanuel Macron said the EU must send a “strong signal” of support for Ukraine, but ruled out the possibility for the country to join the bloc any time soon.

“Can we open today a procedure of accession (to the EU) with a country at war? I don’t think so,” Macron said. “Shall we close the door and say (to Ukraine): ‘Never?’ That would be unfair.”

Upon his arrival at Versailles, Dutch Prime minister Mark Rutte said he told Zelenskyy that Ukraine’s EU accession can’t be sped up.

“There isn’t something like a fast track, a fast procedure,” Rutte said. “We also have to take the Western Balkan nations into account, who sometimes have been working for over a decade to become merely a candidate nation for membership. Think of Albania and Macedonia. Let’s see what we can do in a practical sense.”

Another key deterrent to a hasty decision — which Macron alluded to — is the specific EU treaty clause that if a member falls victim to armed aggression, the other EU countries have an obligation to aid and assist it by all the means in their power.

But specifically the Baltic nations, with their Soviet past, want to reach out to Ukraine.

“It’s also important to show a clear open door for EU membership for Ukraine, that the path is open for them to take and that we as a family of democratic nations would want them,” said Latvian Prime Minister Krisjanis Karins. “That’s very, very important for the Ukrainians right now as a very important signal.”

Leaders’ talks will also focus on how to wean the bloc off its Russian energy dependency and bolster the region’s defense capabilities.

Possible new sanctions against Russia and its ally Belarus — including cutting all their banks from the SWIFT dominant system for global financial transactions — will also be on the table.

“The energy sector is the Kremlin’s main source of income, some 600 million euros a day,” Karins said. “If we were to stop the purchase of Russian energy, that would stop the funding of the Russian military machine.”

All leaders agree that the EU should reduce its dependency on imports of Russian gas, oil and coal while accelerating the green transition. The EU imports 90% of the natural gas used to generate electricity, heat homes and supply industry, with Russia supplying almost 40% of EU gas and a quarter of its oil.

Earlier this week, the European Commission proposed to diversify natural gas supplies and speed up renewable energy development in a bid to reduce EU demand for Russian gas by two-thirds before the end of the year.

Macron said the talks in Versailles aim at determining at which pace the EU can “reduce, then remove” its dependency as the year-end deadline proposed by the commission seems unrealistic to many member states.

It’s also unlikely leaders will follow Washington’s lead and unanimously endorse a full embargo on Russian oil and gas imports. France won’t defend what it considers a radical measure and German Chancellor Olaf Scholz has made clear he opposes the idea.

Efforts to agree on a boycott are complicated because some EU countries, including Germany and Italy, are much more dependent than others on Russia. Poland gets 67% of its oil from Russia, while Ireland receives only 5%.

Rutte said it was essential that the EU should “not (go) hastily in the direction of a complete ban on gas and oil from Russia.”

The EU has showed remarkable cohesion since the war started last month. It quickly adopted massive sanctions targeting Putin himself, Russia’s financial system and its high-maintenance oligarchs. It also took the unprecedented step of collectively supplying weapons to a country under attack.

According to a draft of the summit’s conclusions obtained by The Associated Press, leaders will agree in Versailles that they “must bolster resolutely (their) investment in defense capabilities and innovative technologies,” and to continue efforts to make the EU “a stronger and more capable security provider.”