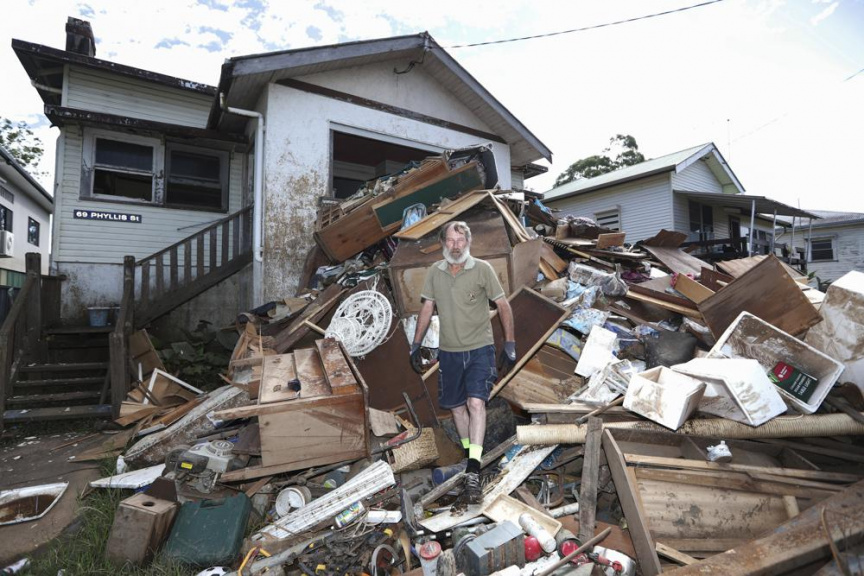 Resident Ken Bridge stands on a pile of his flood-damaged furniture outside his home in Lismore, Australia, Wednesday, March 9, 2022. (Jason O'Brien/AAP Image via AP)

CANBERRA, Australia (AP) — Australia’s prime minister on Wednesday said he would declare a national emergency following floods across large swathes of the east coast that have claimed 22 lives.

The national emergency declaration, Morrison said in a statement, will “ensure all our emergency powers are available and that we cut through any red tape we might face in delivering services and support on the ground.”

It is the first such declaration since a law was passed in December 2020 in response to catastrophic wildfires during the previous Southern Hemisphere summer.

Extraordinarily heavy rains have created the current emergency in New South Wales and Queensland states. Some of the flooded communities were battling fires two years ago.

The declaration means flood victims won’t have to provide identification documents to receive support payment and in some circumstances the federal government can act independently in areas where the state governments haven’t requested help.

Floodwaters peaked in Brisbane, the Queensland capital and Australia’s third-most populous city, on Feb. 28 after it was inundated by 80% of its usual annual rainfall in the previous three days.

More than 20,000 homes and businesses had been flooded in southeast Queensland and 13 people died.

Sydney, New South Wales’ capital and Australia’s most populous city, located 730 kilometers (450 miles) south of Brisbane, has endured the wettest start to a year ever recorded.

Parts of the city of 5 million people were flooded after receiving almost 75% of its average annual rainfall since Jan. 1.

The worst-hit communities were in the Lismore, Clarence Valley and Richmond Valley local government areas of northern New South Wales. Some communities endured the highest floods ever recorded in their locations.

“This is a major catastrophe ... of national proportions,” Morrison said in Lismore.

The number of military personnel helping in the flood recovery in northern New South Wales was to increase by 700 to 2,500 on Wednesday.

Many flood victims are angry that authorities didn’t come to their rescue earlier. Many people were rescued from flooded homes by neighbors.

If community members hadn’t stepped up, “we would have been seeing a death toll in the hundreds of people,” opposition emergency management spokesman Murray Watt told Australian Broadcasting Corp.

“While people are grateful for the assistance they’ve had from the army, there’s just nowhere near enough of it,” Watt added.

While rain has eased in recent days, 40,000 people around New South Wales had been ordered to evacuate, including from dozens of Sydney suburbs.

New South Wales’ death toll increased to nine on Wednesday with police announcing that the body of a 50-year-old truck driver had been found in floodwater on Sydney’s outskirts.

Northern Beaches Mayor Michael Regan said that part of Sydney had been hit with sudden flash-flooding and multiple landslips on Tuesday, with debris still blocking many roads on Wednesday.

“Yesterday was bizarre. It was intense. It was biblical,” Regan told Nine Network television.

Sydney Trains has warned of significant disruption and delays and is advising commuters to avoid non-essential travel and to work from home if possible.

Albanese sworn in as PM in Australia

Most Barrier Reef coral studied this year was bleached

Many evacuate in worst Australian floods in a decade