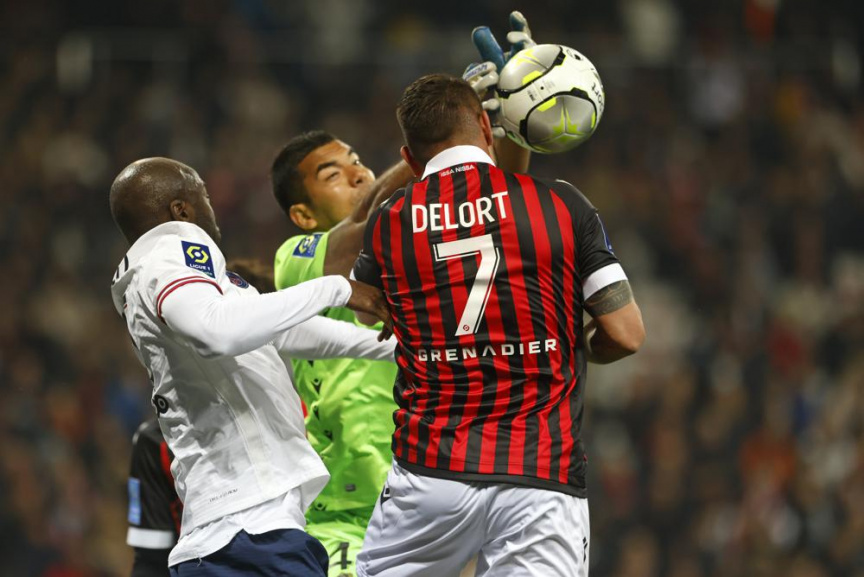 PARIS (AP) — Nice upended French league leader Paris Saint-Germain 1-0 with a score from Andy Delort off the bench and moved into second place on Saturday.

Delort met a cross from Calvin Stengs to volley into the top corner in the 88th minute.

Nice shut out PSG for the third time this season after drawing 0-0 in Paris in the league and the French Cup, even advancing on penalties in the cup.

The Mediterranean side kept a fourth straight clean sheet in all competitions to trail PSG by 13 points and move two points ahead of Marseille.

PSG struggled offensively without suspended France striker Kylian Mbappe, arguably the best player for PSG this season. Lionel Messi proved inefficient in the role of a false nine as PSG lacked penetration in the final third.

“Let’s not beat around the bush, there’s a PSG with Kylian and a (different) PSG without Kylian,” Nice coach Christophe Galtier said. “Maybe when the match is getting tough physically and they don’t manage to make the difference, maybe it can break somewhere.”

In a tactical match, PSG’s best chance in the first half came from a counterattack in the ninth minute when Angel Di Maria’s lob attempt was tipped around the post by Argentine goalkeeper Walter Benitez.

Nice created overloads down the left with fullback Melvin Bard overlapping with Amine Gouiri. Bard made a cross for Pablo Rosario, who mistimed his jump and headed over the bar in the 24th.

The result exposed the weakness of the PSG backline a few days before it visits Real Madrid in the second leg of their last-16 tie in the Champions League. PSG won the first leg 1-0.

“We mustn’t worry, we are still first (in Ligue 1),” PSG center back Marquinhos said. “But losing mustn’t become a habit.”

Also, Marco Bizot pulled off outstanding saves as Brest edged Lens 1-0 to earn its first away win since December and inch closer to safety.

Brest remained in 12th place while Lens lost ground in the race for European spots by dropping to seventh place. Last season, Brest had to fight until the final round to stay in the top division.

Franck Honorat scored the only goal in the 59th by outpacing Lens midfielder Cheick Doucoure before chipping goalkeeper Jean-Louis Leca.

Bizot parried a low drive from Arnaud Kalimuendo in the 20th and pushed behind an angled effort from Gael Kakuta in the 42nd. Lens midfielder Seko Fofana created the best chance in the first half, feeding Kakuta, who dragged his shot wide in the 34th.

Lens pushed harder in the second half but was denied by Bizot again. The Dutch goalkeeper palmed away a curling free kick from Jonathan Clauss in the 51st and made a reflex save in the 56th, stopping with his leg a close-range volley from Florian Sotoca.

On Friday, Lyon won at Lorient 4-1 to move into sixth place.