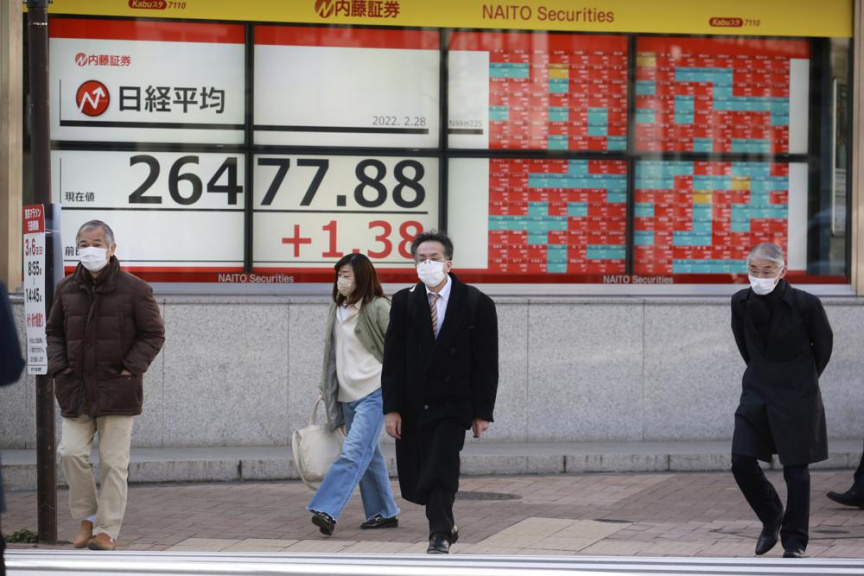 Tokyo, Hong Kong and Shanghai declined while Sydney was higher.

Russia’s invasion of Ukraine has caused markets to swing wildly, given the potential impact on inflation, energy supplies and other repercussions.

The end of the month usually brings a raft of economic data, but for now, the conflict is eclipsing other issues.

“It’s all about the Russia-Ukraine situation and evolutions in that situation will drive market sentiment and direction,” Jeffrey Halley of Oanda said in a commentary.

“President Putin will now have to accept that the ‘Western’ powers are prepared to accept quite a bit of economic pain now to punish Russia,” he said.

The Russian ruble has weakened sharply in the past week but was steady early Monday at 83.86 to the dollar.

Putin ordered Russian nuclear weapons prepared for increased readiness to launch on Sunday ratcheting up tensions with Europe and the United States in a move that unearthed dormant fears from the Cold War era.

Japan joined moves by the U.S. and other western nations to impose sanctions against Russia, including blocking some Russian banks from the SWIFT global payment system.

The central bank restrictions target access to the more than $600 billion in reserves that the Kremlin has at its disposal, and are meant to block Russia’s ability to support the ruble as it plunges in value.

Sanctions announced earlier have taken its currency to its lowest level against the dollar in history and gave its stock market its worst week on record.

Although Asia is unlikely to suffer direct damage from the war in Ukraine, higher energy prices are an unwelcome burden for oil-importing nations like Japan, especially while they are still struggling to recover from the pandemic.

Underscoring the deepening rifts due to the conflict, BP said Sunday it was exiting its 19.75% share in Rosneft, a state-controlled Russian oil and gas company, which it has held since 2013. That stake is currently valued at $14 billion.

The Ukraine conflict has heaped uncertainty atop other worries over interest rates and inflation.

The U.S. Federal Reserve has suggested it will raise short-term interest rates next month by double its usual increase, the first-rate increase since 2018. Higher U.S. rates tend to put downward pressure on all kinds of investments and can have global repercussions.