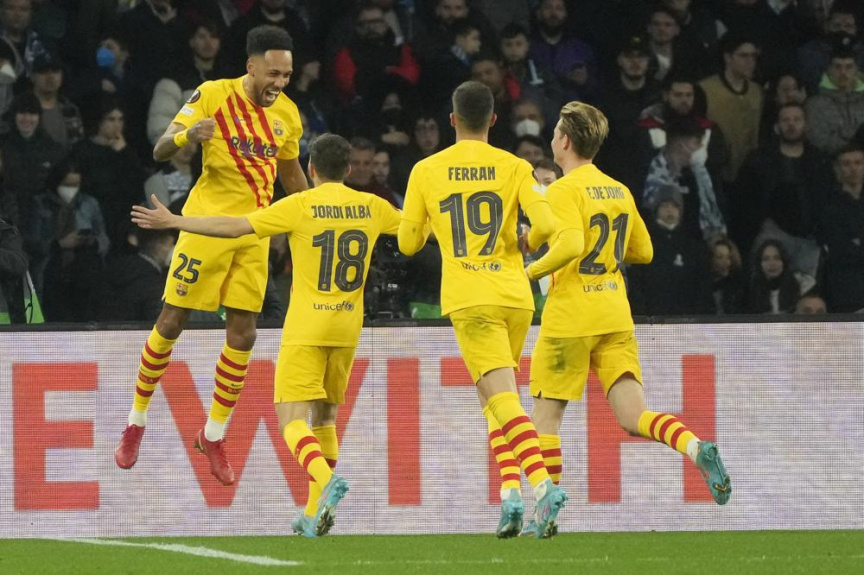 Barcelona found its scoring touch again to reach the round of 16 of the Europa League with a 4-2 win over Napoli on Thursday, while Rangers knocked out Borussia Dortmund in Glasgow.

Frenkie de Jong scored with a long-range curler and newly signed striker Pierre-Emerick Aubameyang netted again for Barcelona, which had been held 1-1 at home in the first leg. The Spanish giant has struggled badly in its first season since the departure of Lionel Messi and was demoted to the Europa League after failing to advance to the Champions League knockout stages for the first time since 2004.

Dortmund is also a Champions League regular but couldn’t come back from a 4-2 home loss in the first leg as a 2-2 draw at Rangers saw the German team eliminated in one of eight playoffs between third-place finishers in the Champions League groups and Europa League group runners-up.

On a night when Europe was rocked by Russia’s invasion of Ukraine, Ukrainian midfielder Ruslan Malinovskyi scored a couple of goals to lead Atalanta into the round of 16.

Malinovskyi netted twice in a two-minute span in the second half for a 3-0 win over Olympiakos as Atalanta advanced 5-1 on aggregate.

After scoring, Malinovskyi lifted his Atalanta jersey to show a message reading “No war in Ukraine” on his undershirt.

Real Betis also advanced after a 0-0 draw with Zenit St. Petersburg that was enough for a 3-2 aggregate victory after the Russian team had a late goal overturned by VAR.

Ten-man Sevilla eliminated Dinamo Zagreb 3-2 on aggregate, Porto knocked out Lazio 4-3 on aggregate and Leipzig won 3-1 at Real Sociedad to reach the next round 5-3 on aggregate.

In the playoff matches to reach the last 16 of the inaugural Europa Conference League, Leicester advanced with a 7-2 aggregate victory over Denmark’s Randers.

The other biggest teams in the playoff round, Marseille and PSV Eindhoven, also advanced while Norwegian upstart Bodø/Glimt knocked out Scottish giant Celtic.

Barcelona jumped out to a 2-0 lead within 13 minutes as Jordi Alba finished off a counterattack after a corner kick at the other end in the eighth minute and de Jong doubled the advantage five minutes later with a sublime strike into the top right-hand corner.

Lorenzo Insigne halved the deficit from the penalty spot before Gerard Piqué restored a two-goal lead in the final minute of the first half.

Aubameyang added the fourth in the second with his fourth goal in five games since a move from Arsenal, while substitute Matteo Politano netted a late consolation goal for Napoli.

James Tavernier netted both goals for Rangers, putting the Scottish side in front from the penalty spot and then netting the equalizer after Jude Bellingham and Donyell Malen had given Dortmund a 2-1 lead.

Portuguese side Braga won a penalty shootout 3-2 against Moldovan side Sheriff a 2-0 home win made it 2-2 on aggregate.

Willi Orbán and Andrés scored to give Leipzig a 2-0 lead and Emil Forsberg added the third from the penalty spot after Real Sociedad pulled one back through Martin Zubimendi.

Lazio striker Ciro Immobile returned from injury to score the opening goal in the 19th with a low shot past goalkeeper Diogo Costa, a minute after he had a goal disallowed due to offside. But Porto forward Mehdi Taremi equalized from the spot and Matheus Uribe gave the Portuguese team a 2-1 lead at Stadio Olimpico in the 68th. Lazio substitute Danilo Cataldi’s goal in stoppage time came too late.

Mislav Oršić scored the lone goal for Dinamo from the penalty spot in Zagreb for a 1-0 victory over Sevilla.

Midfielder James Maddison spearheaded Leicester’s dominant display at Randers with two second-half goals within four minutes and Harvey Barnes also scored with a curling right-foot attempt from inside the box on the way to Leicester’s 3-1 victory on the night.

After winning the first leg 3-1 in Glasgow, Bodø/Glimt dominated again at home with another 2-0 victory even though the Norwegian champions are between domestic seasons.

PSV held Maccabi Tel-Aviv 1-1 to advance 2-1 on aggregate while Marseille won 3-0 away at Qarabag to complete a 6-1 rout.

Slavia Prague earned a second straight 3-2 win over Fenerbahce, Vitesse beat Rapid Vienna 2-0 to erase a 2-1 deficit from the first leg and Partizan Belgrade advanced with a 2-1 over Sparta Prague. PAOK eliminated Danish side Midtjylland on penalties after a 2-2 aggregate score.

Barça held 1-1 by Napoli, Rangers win in Dortmund in EL