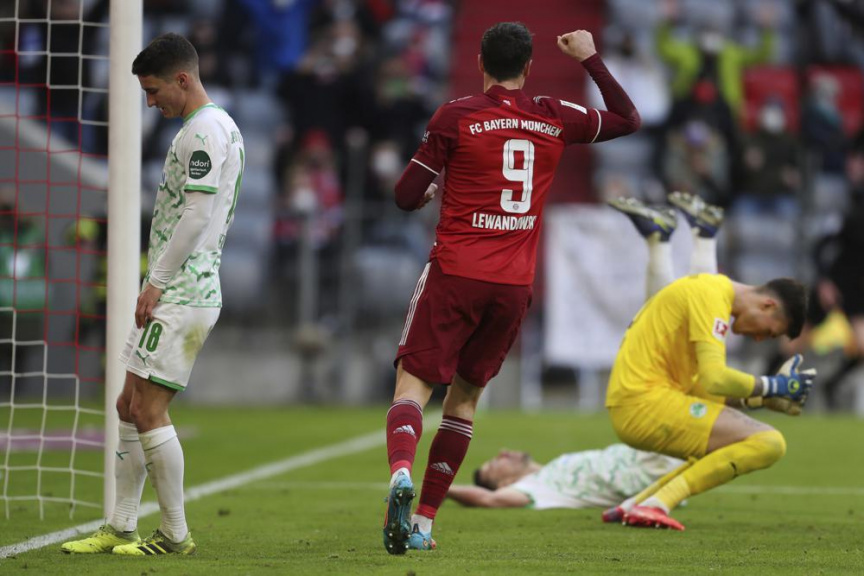 BERLIN (AP) — A fired-up Robert Lewandowski scored twice as Bayern Munich came from behind to beat last-place Greuther Fürth 4-1 in the Bundesliga on Sunday.

The Poland star took his league-leading tally to 28 goals in 23 games and helped Bayern stay six points ahead of Borussia Dortmund, which thrashed Borussia Mönchengladbach 6-0.

If Bayern fans had been expecting a reaction after two games without a win — Bayern lost 4-2 at promoted Bochum before drawing 1-1 in Salzburg in the Champions League — they had to wait till the second half to get it.

Fürth captain Branimir Hrgota fired the competitive underdogs ahead in the 42nd minute when his free kick took a decisive deflection off Bayern’s Marcel Sabitzer.

Riled by the setback, Lewandowski was booked for his reaction to Hrgota after the Pole fouled the forward to stop a counterattack.

There were even whistles from some unhappy Bayern supporters at the break.

Lewandowski equalized only a minute into the second half and Bayern kept pushing to force an own-goal from Sebastian Griesbeck in the 61st. Griesbeck also scored an own-goal in the sides’ previous meeting, which Bayern won 3-1.

DORTMUND PUTS ON A DISPLAY

Dortmund was under pressure to respond after a lackluster defeat to Rangers in the Europa League and a 5-2 loss at home to Bayer Leverkusen still fresh in the memory.

But clinical finishing proved the difference as Marco Reus led the team to a rout of Gladbach.

The Dortmund captain opened the scoring in the 26th with much of the work done by Raphaël Guerreiro. The Portugal defender cut inside and combined with Donyell Malen, who tested Yann Sommer with a fierce shot. The rebound fell kindly for Reus to steer in.

Reus played a brilliant ball forward for Malen to make it 2-0 in the 32nd. The Dutch forward was somewhat fortunate to see his shot squeeze under the Gladbach ’keeper.

Reus also set up Marius Wolf for the third goal in the 70th and Youssoufa Moukoko for the fourth in the 74th, before he scored his second in the 81st.

Emre Can completed the rout with a penalty in injury time.

Injuries provided the only concern for Dortmund.

Gio Reyna lasted less than half an hour on his first start since Aug. 27. The American midfielder left the field in tears after what looked like a recurrence of the right hamstring injury he suffered in the United States’ opening World Cup qualifier on Sept. 1.

Dan-Axel Zagadou was next to go off in the 42nd after clutching the back of his right leg, and there was a brief delay before play could resume as Jude Bellingham lay on the field.

Reus also needed treatment after feeling the force of his goalkeeper Gregor Kobel’s arm to the side of his head during a clearance.

Both Bellingham and Reus were able to continue, with the latter going on to score again and set up two more.