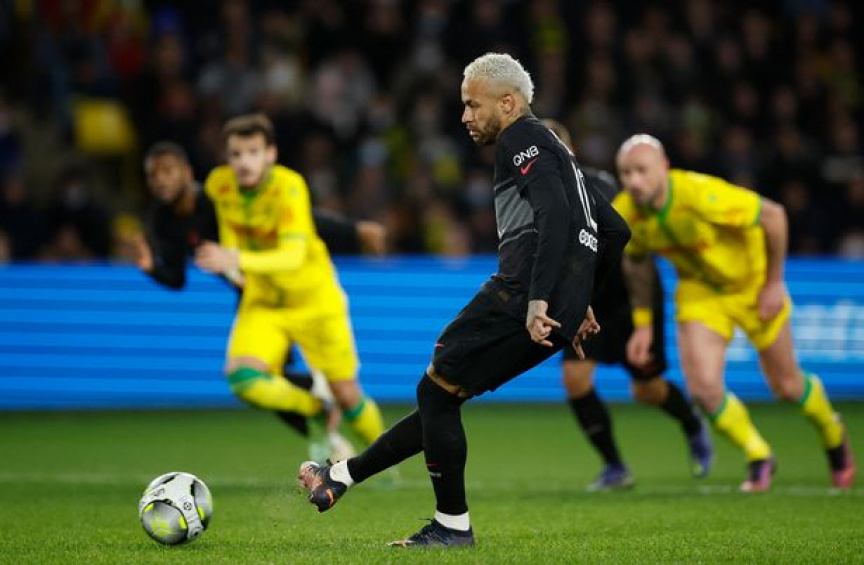 PARIS (AP) — Runaway leader Paris Saint-Germain slipped to only its second French league defeat of the season after losing 3-1 at an inspired Nantes on Saturday.

PSG still has a big lead and will be 10 points clear even if second-place Marseille wins on Sunday, yet the manner of the defeat looks worrying for coach Mauricio Pochettino.

Without late equalizers and winners for PSG this season, the league table would be much closer. There was no escape this time.

Pochettino’s side trailed 3-0 at halftime, the first time PSG has conceded three in the first half since cash-rich Qatari investors QSI bought the club 11 years ago.

Randal Kolo Muani put Nantes ahead after just four minutes and 19-year-old forward Quentin Merlin blasted the ball into the top left corner in the 16th as the home side stunned PSG.

Nantes defender Dennis Appiah was shown a red card for pulling back Kylian Mbappe near the end of the first half.

Referee Mikael Lesage then went to a video review and changed it to a yellow.

The referee was busy again deep into first-half stoppage time when he consulted VAR and spotted a handball from Georginio Wijnaldum. Midfielder Ludovic Blas converted the penalty.

Neymar pulled a goal back from Lionel Messi’s pass just after the break. It was Neymar’s first start since late November, when he sprained his left ankle.

Neymar then fluffed a penalty with a tame shot in the 59th, trying to send goalkeeper Alban Lafont the wrong way but shooting straight at him.

Mbappe scored a brilliant late winner against Real Madrid in the first leg of their Champions League last-16 match on Tuesday.

When he lost the ball near the edge of the Nantes penalty area, however, the home side launched a stunning counterattack. Nigeria forward Moses Simon slipped a pass to Kolo Muani, who put the ball through the legs of goalkeeper Keylor Navas.

Nantes coach Antoine Kombouare was formerly in charge of PSG. He was replaced midway through the 2011-12 season to make way for Carlo Ancelotti, even though PSG was three points ahead at the top. Montpellier won the league by three points with PSG finishing second.

Kombouare was thrilled with Kolo Muani’s early goal, turning to the home fans and pumping his fist.

The crowd roared moments later when Lafont saved from Messi; and again when he thwarted Senegal midfielder Idrissa Gueye and Neymar in quick succession. Navas rescued PSG with a smart stop from Simon, all inside 30 frantic minutes.

Blas curled just wide from outside the area after PSG lost the ball, and PSG midfielder Marco Verratti was shown a yellow card for persistent complaining during an exciting first half.

Kombouare saved Nantes from relegation last season and has transformed the club where he made his name as a rugged defender.

Nantes moved into fifth place on goal difference from Lyon, with fourth earning automatic entry into the Europa League.

Making the most of a rare start this season, Kadewere equalized just before halftime when he turned in Karl Toko Ekambi’s pinpoint cross to the back post.

Captain Seko Fofana went close for Lens in the 80th when Lopes tipped his powerful shot onto the crossbar.