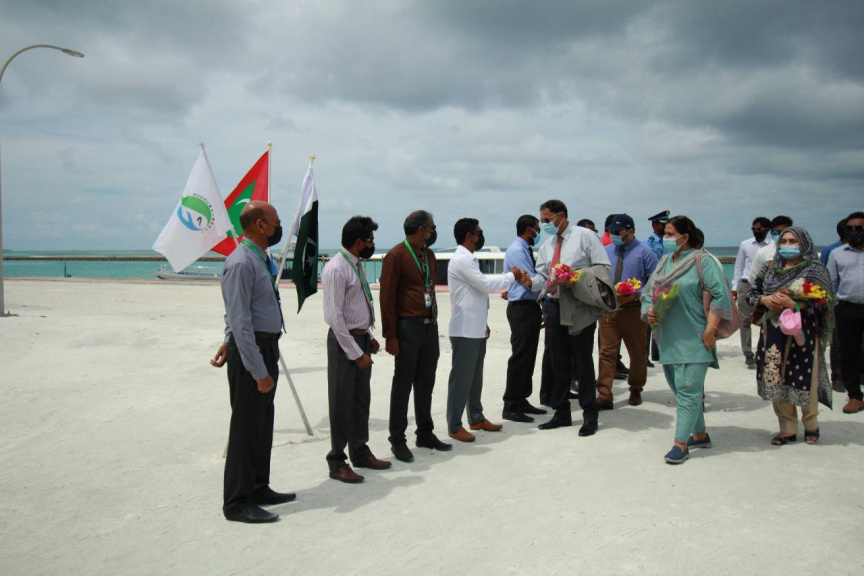 Pakistan has donated over MVR 2.6 million for the construction of a community center in M. Atoll.

At the ceremony, High Commissioner Mukhtar presented a cheque of MVR 2,621,400 – which will be utilized for the construction of the community center - to M. Atoll Council’s President Nimal.

“We share much things in common. Our relations are based on common faith, historic links, mutual trust and respect. Today, the foundation stone has made another monument of friendship between people of Pakistan and Maldives,” he said.

Mukhtar noted that Pakistan had been working with the Maldivian government in a wide range of areas, including education, health, sports, human resource, social sectors and capacity building.

He provided assurance of Pakistan’s continued assistance to Maldives.

Nimal, in his speech, thanked Pakistan for the generous gift and highlighted on the need for the community center.

According to Nimal, the community center will serve as a premises of temporary stay for those who seek medical treatment in Muli, as a place to hold community gatherings, and will be utilized for human resource and capacity building, and other community activities.

Zulqurnain Ahmad, too, said that the community center would benefit the people of the entire atoll, and expressed confidence the center will be completed in a timely manner under the management of the M. Atoll Council.

MP Naseer and MP Ikram, in their speeches, thanked Pakistan for the generous assistance.

President to embark on tour of Lh. Atoll on Friday