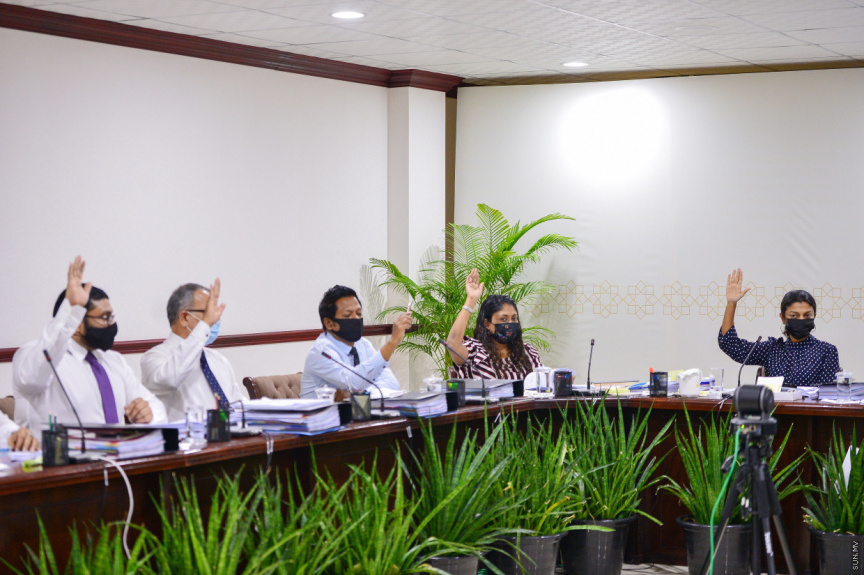 Some members of the Parliament's Committee on National Security Services (214 Committee) captured at a meeting. (Sun Photo/Fayaz Moosat)

The meeting of the Parliament’s Committee on National Security Services (241 Committee) to examine the implementation of the Inquiry Report compiled by Committee in connection to the May 6 terror attack on Parliament Speaker, former President Mohamed Nasheed, took place behind closed doors.

Discussion on letters sent by the government regarding the matter was put on the agenda for today’s Committee meeting. When the meeting had reached the point of discussion on the letters – it continued behind closed doors.

As the letters sent by the government were declared confidential – it was the Committee’s Vice Chairperson, South Henveiru MP Hussain Shaheem who has proposed to continue the segment of the meeting behind closed doors. The proposal was passed by the unanimous votes of all Committee members.

The inquiry report which was formulated after discussions with a multitude of people had stressed negligence by many; including that of Defense Minister Mariya Ahmed Didi and Home Minister Imran Abdulla.

The report made a total of 45 recommendations – which covers general security to Nasheed, and his security at his residence and during his travel via air, land and sea.

It recommends that police provide assistance to implement recommendations by Defense Intelligence Service following threat assessments, as well as assistance to provide security and protection to Nasheed when needed.

The report also recommends establishing a harmonized data system as soon as possible, through which Maldives National Defense Force, the police and other institutions declared on the Counter-Terrorism Act can exchange intelligence on matters that may threaten national security.

The report recommends expedition of the implementation of whole government approach and whole society approach to curb the spread of extremism in Maldives, and for Islamic Ministry, Youth Ministry, and Gender Ministry to pay special attention to matters under their purview in the efforts to counter terrorism and extremism under the policies.

The report also recommends reviewing the legal and other challenges in finding telecommunication data to improve the efficiency of counter-terrorism efforts and take action, and finding solutions to the challenges.

The report calls for the establishment of a mechanism to identify and take action against people who engage in communications that incite terrorism and extremism via media and social media.