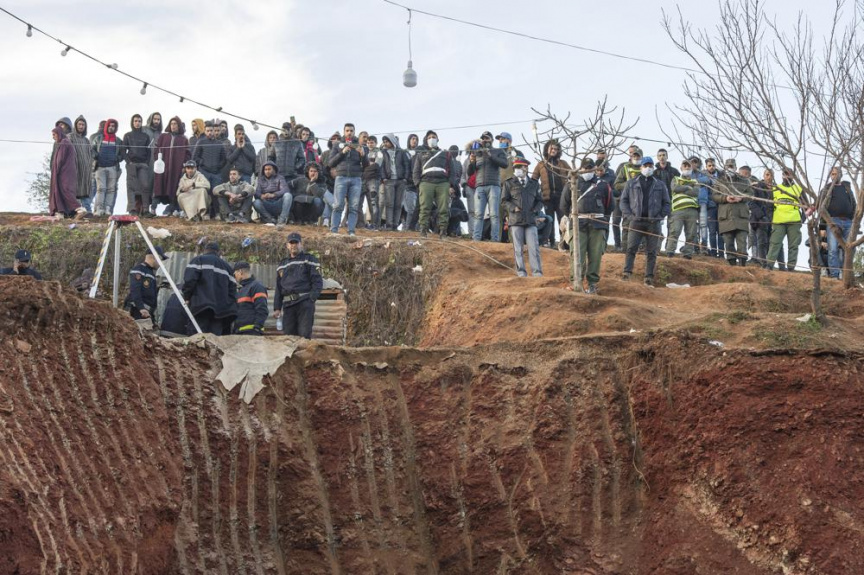 Residents watch in concern as civil defense and local authorities dig in a hill as they attempt to rescue a 5 year old boy who fell into a hole near the town of Bab Berred near Chefchaouen, Morocco, Thursday, Feb. 3, 2022. (AP Photo)

The boy has been stuck in the well, located in the northern village of Ighran in Morocco’s Chefchaouen province, since Tuesday evening. Rescuers said Thursday they have managed to get down oxygen and water to him, and got a response from him.

“I pray and beg God that he comes out of that well alive and safe,” his mother Wassima Kharchich told local television 2M. “Please God, ease my pain and his, in that hole of dust.”

Khalid Agoram, the boy’s father, told another local broadcaster that he been looking for his son for hours on Tuesday before discovering that he had fallen into the well.

Rescue workers used a rope to provide an oxygen tube and water to the boy, but were unable to reach the hole where he is trapped. They also sent down a CCTV camera to monitor him, according to Morocco’s official MAP news agency.

Rescue workers used five bulldozers to dig a hole parallel to the well in an attempt to reach the boy, identified as Rayan, MAP said. Local officials said rescuers have so far reached 19 meters.

“I managed to communicate with the child and asked if he could hear me. There was a response. I waited for a minute and saw that he began using the oxygen,” Red Crescent volunteer Imad Fahmy told 2M.

Medical staff are on site to attend to the boy, with a helicopter on standby to transport him to the nearest hospital.

Government spokesperson Mustapha Baytas said Thursday that the government is closely monitoring the situation, studying different ways to help save the child.

Thousands of Moroccans took to social media to express their sympathy with the boy and his family. The hashtag #SaveRayan has been trending for hours in Morocco and Twitter posts have brought global attention to the rescue efforts.

Morocco to use Chinese vaccine for mass vaccination