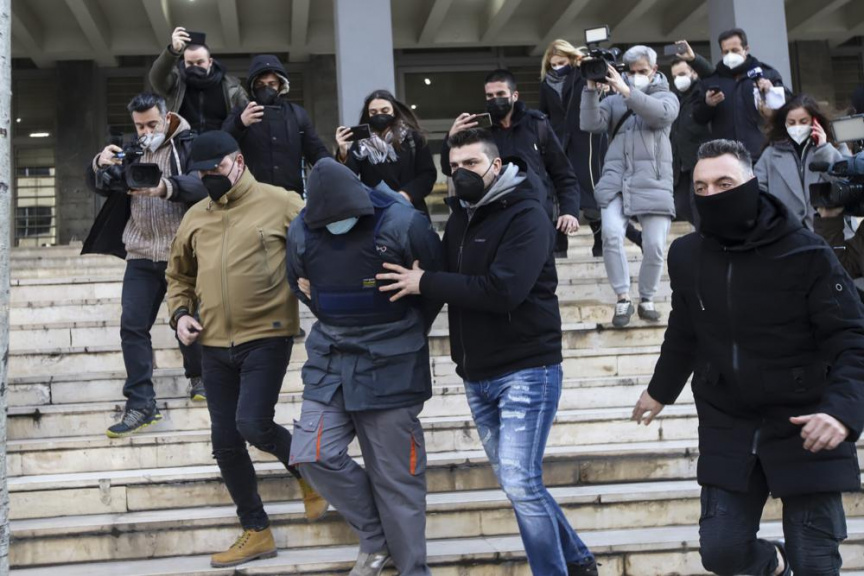 Greek police officers in plain clothes escort the 23 year-old man accused of the murder of 19-year-old city resident Alkis Kambanos as they leave the court house in Thessaloniki Greece, on Thursday Feb. 3, 2022. (MotionTeam/Eurokinissi via AP)

The raids were carried out at 13 venues suspected of being used for organizing attacks, and police set up roadblocks in the surrounding areas. Two people were arrested during the searches.

Thessaloniki resident Alkis Kambanos died after being stabbed and severely beaten late Monday. Two others were also injured in the street attack by a group of young men, police said. A 23-year-old man was later arrested and charged with murder as well as attempted murder.

The killing, in a city which has a heated rivalry between local teams PAOK and Aris, has shocked the country and drew strong condemnation from political leaders.

“How can we let our streets, parks, and squares become the stage for violence between rival gangs, endangering the safety of our citizens?” Greek President Katerina Sakellaropoulou, a former top high court judge, wrote in an online post. “The damage inflicted on society by such acts will continue as long … as this barbarism and violence on and off the field are cultivated as a display of manhood.”

Supporters’ clubs are often used by violent fans to stage attacks, and police this week seized ice picks, flares, pitch forks and baseball bats in a raid at one venue. Greece has battled soccer-related violence for decades and league organizers have started inviting referees from other European countries to officiate at important matches to try and address claims of bias at games.