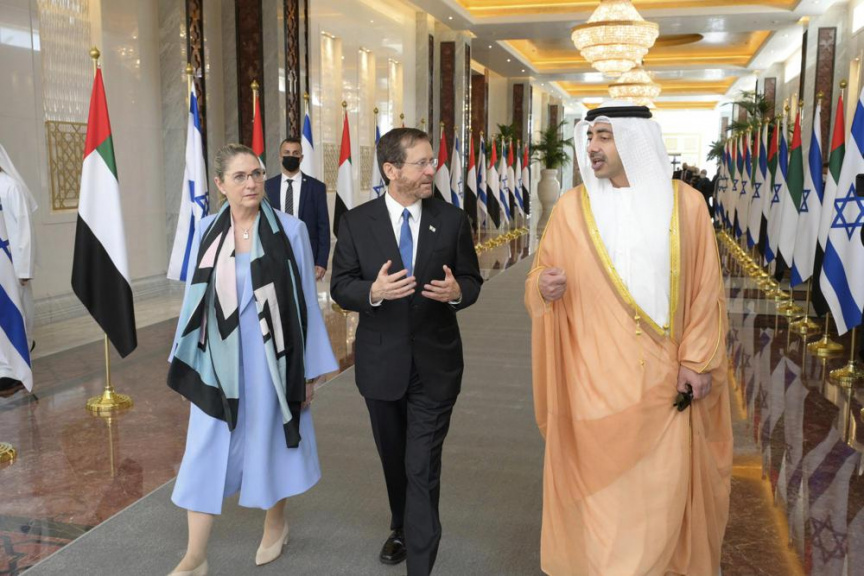 The attack amid President Isaac Herzog’s visit only fuels the ongoing tensions affecting the wider Persian Gulf, which has seen a series of attacks as Iran’s nuclear deal with world powers collapsed and Yemen’s yearslong war raged.

As negotiators in Vienna now attempt to save the accord and Emirati-backed forces press on the Houthis, the rebels are launching their longest-range attacks yet. Those assaults represent a major challenge for the Emirates, which long has advertised itself to international businesses as a safe corner of an otherwise-dangerous neighborhood.

The UAE’s state-run WAM news agency reported the interception, saying that “the attack did not result in any losses, as the remnants of the ballistic missile fell outside the populated areas.”

It wasn’t immediately clear where the missile remnants fell. The country’s civilian air traffic control agency said there was no immediate effect on air travel in the UAE, home to the long-haul carriers Emirates and Etihad.

Already, the country’s top prosecutor has threatened that people who film or post images of such an incident would face criminal charges in the UAE, an autocratic federation of seven sheikhdoms on the Arabian Peninsula. That makes reporting on such incidents even more complicated for journalists.

In the absence of those videos, the Emirati Defense Ministry released black-and-white footage it described as showing the destruction of a ballistic missile launcher in Yemen’s al-Jawf province some 30 minutes after the attack. Another attack last week saw a similar strike launched on al-Jawf in the minutes after, leading analysts to suggest the Emiratis may be receiving intelligence assistance from the West for its strikes.

Houthi military spokesman Yehia Sarei wrote on Twitter that the rebels would make an announcement about an attack in the coming hours that reached into “the depths of the UAE.” He did not elaborate. The Houthis’ Al-Masirah satellite news channel later reported that airstrikes had begun targeting Sanaa, Yemen’s rebel-held capital.

“I wish to emphasize that we completely support your security requirements and we condemn in all forms and language any attack on your sovereignty,” Herzog told Sheikh Mohammed, according to his office.

Herzog’s office told The Associated Press early Monday that the trip was “expected to continue as planned” when asked about the missile interception. It did not elaborate. Herzog was scheduled to visit Dubai’s Expo 2020 world’s fair Monday, which the Houthis had previously threatened to target.

U.S. State Department spokesperson Ned Price condemned the Houthi attack. “While Israel’s president is visiting the UAE to build bridges and promote stability across the region, the Houthis continue to launch attacks that threaten civilians,” Price wrote on Twitter.

In the hours after the Houthi attack early Monday, Syrian state-run media said an Israeli strike hit near Damascus. The Israeli military did not immediately acknowledge it.

Israeli Prime Minister Naftali Bennett in December made his first official visit to the Gulf Arab sheikhdom and discussed strengthening relations on a number of fronts with Sheikh Mohammed. The visits come after the UAE and Bahrain recognized Israel and established diplomatic relations in 2020. Palestinian leaders have condemned the normalization deal as a betrayal of their cause for statehood.

Last week, a similar attack saw both Emirati and U.S. forces fire interceptor missiles to bring down down a Houthi attack as the missiles came near Al-Dhafra Air Base in Abu Dhabi, which hosts some 2,000 American troops. The U.S. military did not immediately respond to requests for comment.

The attacks have helped propel benchmark Brent crude oil prices above $90 a barrel, further squeezing a global economy grappling with inflation in the coronavirus pandemic.

Although the UAE has largely withdrawn its own forces from Yemen, it is still actively engaged in the conflict. It supports militias fighting the Iranian-backed Houthis, who seized Yemen’s capital, Sanaa, in September 2014. A Saudi-led coalition, which the UAE is a part of, entered the conflict in March 2015.

Iran has denied arming the Houthis, though U.N. reports, independent analysts and Western nations point to evidence showing Tehran’s link to the weapons. Experts, however, debate how much direct control Tehran exercises over the Houthis.

Yemen’s war conflict has turned into the world’s worst humanitarian crisis, with international criticism of Saudi-led airstrikes that have killed hundreds of civilians and targeted the country’s infrastructure. Attacks after the first round of Houthi missile fire on Yemen in January saw the Saudi coalition strike a prison and kill some 90 people, as well as knock the country off the internet for days.

The Houthis meanwhile have used child soldiers and indiscriminately laid landmines across the country.

The missile attacks targeting the UAE come as the Houthis face pressure and are suffering heavy losses on the battlefield. Aided by the Emirati-backed Giants Brigades, Yemeni government forces took back the province of Shabwa earlier this month in a blow to Houthi efforts to complete their control of the entire northern half of Yemen.

While Emirati troops have been killed over the course of the conflict, until this month the war hadn’t directly affected daily life in the wider UAE, a country with a vast foreign workforce.