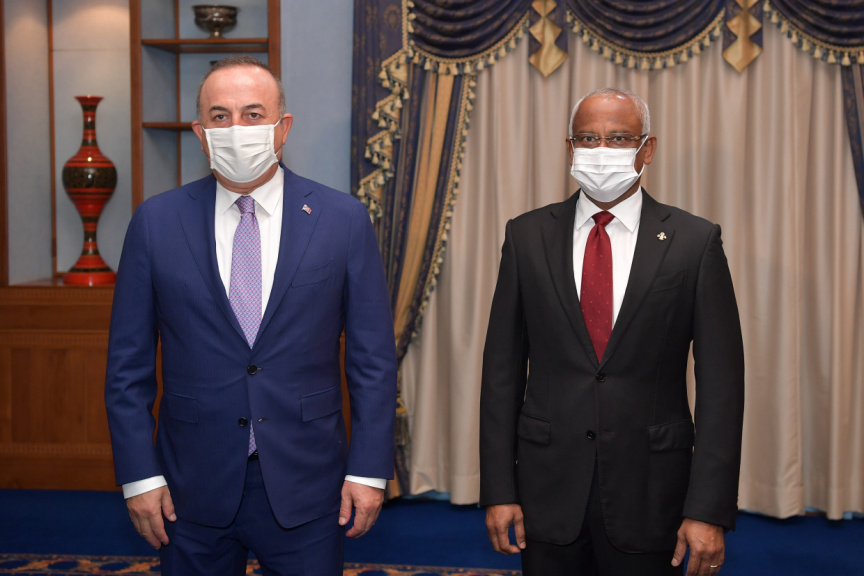 During the courtesy called paid on Sunday by the Foreign Minister of Turkey Mevlüt Çavuşoğlu on President Ibrahim Mohamed Solih, a wide range of topics of mutual interests were discussed.

Both diplomats spoke about the bilateral ties between the nations, highlighting that 2021 marked the 42nd anniversary of establishing formal diplomatic relations.

Speaking in this regard, President Solih noted that the Turkish Foreign Minister’s visit to Maldives also denotes the significance the Turkish government places on enhancing the bilateral ties between both countries.

Moreover, the five MoU’s to be signed later in the day which would strengthen the bilateral ties between Maldives-Turkey were also discussed.

President Solih conveyed the gratitude of the government and the people of the Maldives to the Turkish government for their decision to donate 20,000 doses of Sinovac vaccines to support the Maldivian government’s Covid-19 inoculation drive.

Both the Foreign Minister and President Solih expressed mutual commitment to continue working together for the mutual benefit of both people.

Diplomatic relations between the Maldives and Turkey were established on May 28, 1979.