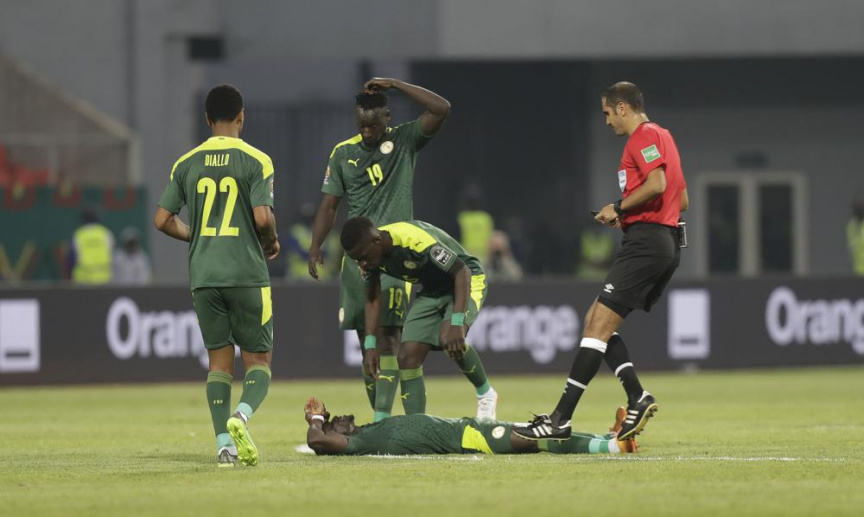 Senegal's Saido Mane lays on the pitch following a collision during the African Cup of Nations 2022 round of 16 match between Senegal and Cape Verde at Kouekong Stadium, Bafoussam, Cameroon, Tuesday, Jan. 25, 2022. (AP Photo/Sunday Alamba)

BAFOUSSAM, Cameroon (AP) — Sadio Mané got up from a horrible clash of heads that left him dazed on the ground, possibly with a concussion, to score a goal and help put Senegal into the quarterfinals of the African Cup of Nations on Tuesday.

Senegal won 2-0 against Cape Verde, which had two players sent off in the last 16 game in Cameroon’s western city of Bafoussam. The Liverpool star didn’t finish the match and later was taken to the hospital, though he said on social media that he was OK.

Morocco followed Senegal into the last eight by coming from behind to beat Malawi 2-1. The Moroccan comeback was completed by a magical free kick by Paris Saint-Germain’s Achraf Hakimi, who curled the ball over the wall and into the top corner for the winner in the 70th minute.

He ran across to the Morocco bench and took a bow.

The African Cup action continued a day after a crush outside the stadium at the Cameroon-Comoros last 16 game left eight people dead and seven others in a serious condition, throwing a shadow over the continent’s top soccer tournament. There had been questions about whether the day’s games would go ahead. They did, after a moment’s silence at both. Some players also wore black armbands.

“Eight people who died yesterday at Olembe Stadium will always be in our memory,” Hakimi wrote on Twitter after his team’s victory. “Football takes a back seat today despite it is happy day for our country after the classification to quarterfinals of Africa Nations Cup. Rest in peace.”

In the Senegal-Cape Verde game, Cape Verde’s second red card was dished out to goalkeeper Vozinha when he raced out of his area and tried to head a ball clear with Mané chasing it down. The players’ heads clashed badly as they leaped in the air and Vozinha clearly sustained a concussion as he tried to get up afterward and ended up staggering around.

Vozinha left on a stretcher and wasn’t around to see the red card referee Lahlou Benbraham held up for him.

But questions will be raised over Mané being allowed to continue after he hit the ground face first following the collision, rolled over and lay still on his back for a moment, clearly dazed, possibly with a concussion.

Mané dragged himself to his feet and scored less than 10 minutes later in the 63rd minute when a corner kick fell to him beyond the far post, and he sent a right-footed shot in off the crossbar.

The Liverpool forward was eventually substituted in the 70th minute, clearly struggling. It was more than 15 minutes after sustaining the head knock that appeared serious enough for him to be taken off immediately.

Mané later posted a photo on Facebook of him and Vozinha together and smiling at the hospital, with the words: “Everything is good. Thank you to everyone for the messages!” The Senegal star was sitting upright in his hospital bed, with Vozinha standing alongside.

Without Mané, Senegal finished off nine-man Cape Verde with a second goal from a breakaway in injury time by Bamba Dieng.

Cape Verde was up against it from the 21st minute when Patrick Andrade was sent off for a tackle on Pape Gueye. The two red cards for Cape Verde meant seven red cards have been handed out in the first five knockout games of the African Cup. Every last 16 game has had at least one sending off.

Mané’s injury again focused attention on soccer’s struggle to deal effectively and safely with concussions. The issue has been high-profile in recent years, with the game criticized for allowing players to play on after having sustained dangerous head injuries.

Cape Verde goalkeeper Vozinha fought with team medics when they tried to help him off the field after the collision, insisting that he wanted to play on despite being unable to even stand properly. They eventually convinced him to walk shakily to the sidelines. The red card made certain he wouldn’t be returning anyway.

Although Hakimi’s pinpoint free kick won it, Malawi had a stunner of its own to open the scoring in Yaounde when Gabadinho Mhango hammered a shot from way out in just the seventh minute. That gave the minnow a shock lead on its first appearance in the knockout stage of the African Cup.

Morocco controlled the game from then on and should have won by more goals. Youssef En-Nesyri’s headed equalizer in first-half injury time and Hakimi’s moment of class were enough.