Gladbach in crisis after 2-1 loss to Union, Dortmund wins 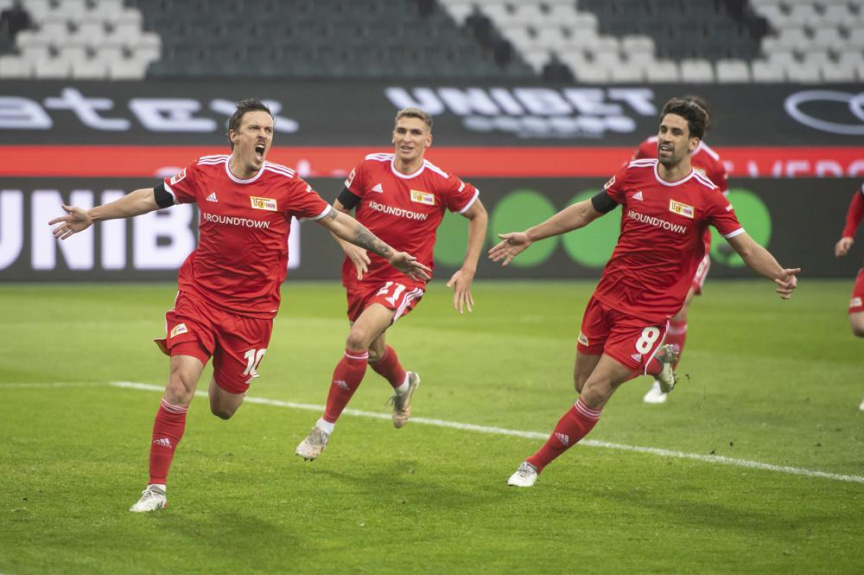 BERLIN (AP) — Max Kruse scored twice for Union Berlin to leave Borussia Mönchengladbach in crisis on Saturday after a 2-1 defeat in the Bundesliga.

It was Gladbach’s fourth straight league loss at home, just days after its German Cup exit to second-division Hannover. The latest defeat piles the pressure on coach Adi Hütter, who was already under scrutiny after losing six of the last eight games across all competitions.

“Union scored with their only chances,” Hütter said. “There’s no way we deserved to lose.”

Gladbach is only three points above the relegation zone and Hütter said before Union’s visit that his team will be “several weeks” without captain Lars Stindl, who injured his knee in training on Friday.

Union, which was only promoted to the Bundesliga in 2019, moved fourth, the last qualification place for the Champions League.

“Today we had a bit of luck, but it can’t be just luck that we have 34 points after 20 rounds. It’s hard work that’s paying off,” Kruse said. “For that you have to compliment the whole club for what we’ve delivered in the last years.”

Kruse opened the scoring in the 18th minute with a penalty awarded through VAR for a hand ball from Denis Zakaria on his comeback. Zakaria’s arm was high as Andreas Voglsammer’s cross grazed his hand.

Gladbach struck back five minutes before the break, when Breel Embolo played the ball between Robin Knoche’s legs and then found Jonas Hofmann, who waited before playing the ball in to Kouadio Koné. The French midfielder let fly inside the right post for his first Bundesliga goal.

Luca Netz had Gladbach’s best chance for a winner, but fired over from close range.

Kruse made no mistake with Union’s only chance of the second half, squeezing the ball inside the far post in the 84th after Niko Gießelmann played him in.

Borussia Dortmund bounced back after its German Cup exit to second-division St. Pauli with a clinical display in Sinsheim, where the visitors scored three goals with two shots on target.

Donyell Malen set up the three as his team edged Hoffenheim 3-2 and cut the gap on Bayern Munich to three points. Bayern visits struggling Hertha Berlin on Sunday.

Erling Haaland, who scored the opening goal for Dortmund, went off in the second half with an apparent groin injury.

Haaland got the visitors off to a great start in the sixth minute after a fine one-touch move from his teammates. Raphaël Guerreiro played the ball back with his heel for Malen, who had a one-two with Jude Bellingham before crossing for Haaland to score his 16th goal of the season.

But Dortmund failed to press its advantage. American defender Chris Richards hit the crossbar and Hoffenheim missed several other chances before Andrej Kramarić scored a deserved equalizer before the break.

Malen set up Marco Reus to score with Dortmund’s second shot on goal in the 58th. Hoffenheim had had 11 goal efforts by then.

Malen set up Dortmund’s next goal, too. The Dutch winger crossed for Davin Raum to turn the ball inside his own net in the 67th.

Hoffenheim’s Munas Dabbur set up Georginio Rutter in the 77th for an exciting finale, but Dortmund held on.

Freiburg moved fifth with a 2-0 win over relegation candidate Stuttgart, and last-place Greuther Fürth claimed its second win of the season with a 2-1 victory over Mainz.

Midfielder Takuma Asano salvaged a 2-2 draw for Bochum against visiting Cologne in the late game.