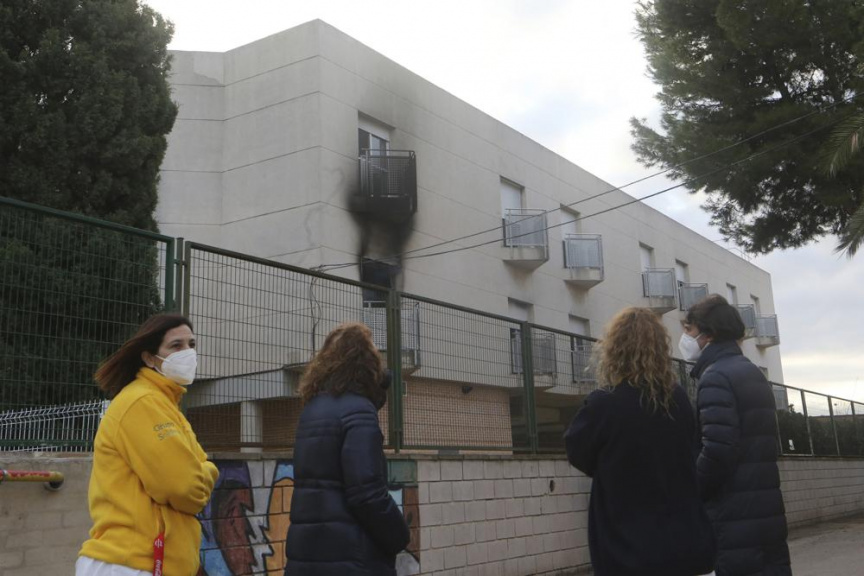 People look towards a nursing home after a fire in the municipality of Moncada just north of Valencia, Spain, Wednesday Jan. 19, 2022. (Alberto Saiz)

MADRID (AP) — Six residents of a nursing home in eastern Spain died after a fire started by a faulty power strip broke out in the night, authorities said Wednesday.

Another 17 residents were hospitalized, with three in serious condition, the regional leader of Valencia, Ximo Puig, said.

Firefighters said a total of 70 residents were evacuated from the nursing home in the municipality of Moncada, just north of the city of Valencia.

Firefighter chief José Basset told Spanish news agency EFE that the fire appears to have started in a bedroom on the second floor.

“There was a large number of people asking for help who were trapped by the smoke” when firefighters arrived, he said.

Spain’s Civil Guard police force said its preliminary investigation pointed to a power strip as the source of the fire.

“The most important thing now is the recovery of those who have been injured,” Puig said.

Spanish Prime Minister Pedro Sánchez tweeted in Spanish that he was following “the tragic news from Moncada. My condolences to the families of the victims. We are watching with concern the evolution of the injured. All our support for the families and the town.”

Municipal authorities in Moncada have called for three days of mourning, with flags flying at half-staff on the town hall building. Officials called for a minute of silence at noon local time.

Spain’s nursing homes, like those in many other countries, were particularly hard-hit during the worst months of the coronavirus pandemic.

Spain records hottest year ever in 2022

Trial begins in Spain over train crash that killed 80