Israel probes death of elderly Palestinian who was detained 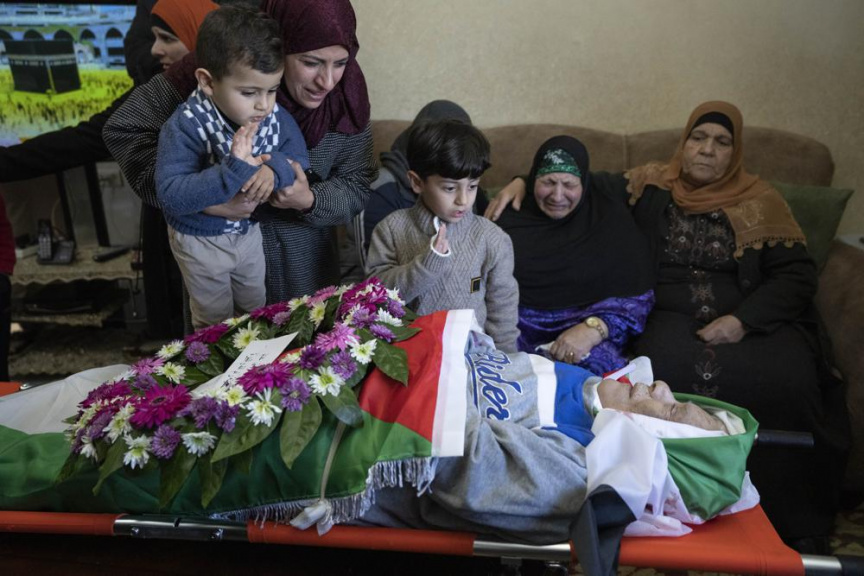 Mourners take a last look at the body of Omar Asaad, 80, in the family house, during his funeral in the West Bank village of Jiljiliya, north of Ramallah, Thursday, Jan. 13, 2022. (AP Photo/Nasser Nasser)

JERUSALEM (AP) — Israel was investigating after an 80-year-old Palestinian with U.S. citizenship died of a heart attack after being detained by Israeli soldiers in the occupied West Bank.

The State Department said it was in touch with the Israeli government to seek “clarification” about the incident, which occurred early Wednesday, and that it supports a “thorough investigation.”

Omar Asaad was detained by Israeli forces while returning from a relative’s home in his hometown of Jiljiliya, near the West Bank city of Ramallah. He was brought to a hospital hours later, dead from a heart attack, according to the Palestinian Health Ministry.

Jiljiliya Mayor Fouad Qattum, citing witnesses, said the soldiers stopped Asaad’s vehicle and removed him by force shortly before dawn. He said they took Asaad, bound and blindfolded, to an abandoned building nearby. Later, they detained a number of young men from the surrounding area in the same building.

Qattum said the other detainees did not know Asaad was there because it was dark and he didn’t make a sound. They only found him later, after the army had withdrawn, lying on his stomach with his jacket draped over him. They administered first aid and called an ambulance, but the medics were unable to revive him. It’s unclear when he died.

“The other young men who were detained didn’t know he was there. If he had been alive he would have said something,” Qattum said.

The Israeli military said in a statement Wednesday that Asaad was arrested “after resisting a check” and was released later that night, implying he was alive. It said the military police are reviewing the incident.

Israel says it thoroughly investigates incidents in which Palestinians are killed by Israeli troops. But rights groups say those investigations rarely lead to indictments or convictions, and that in many cases the army does not interview key witnesses or retrieve evidence.