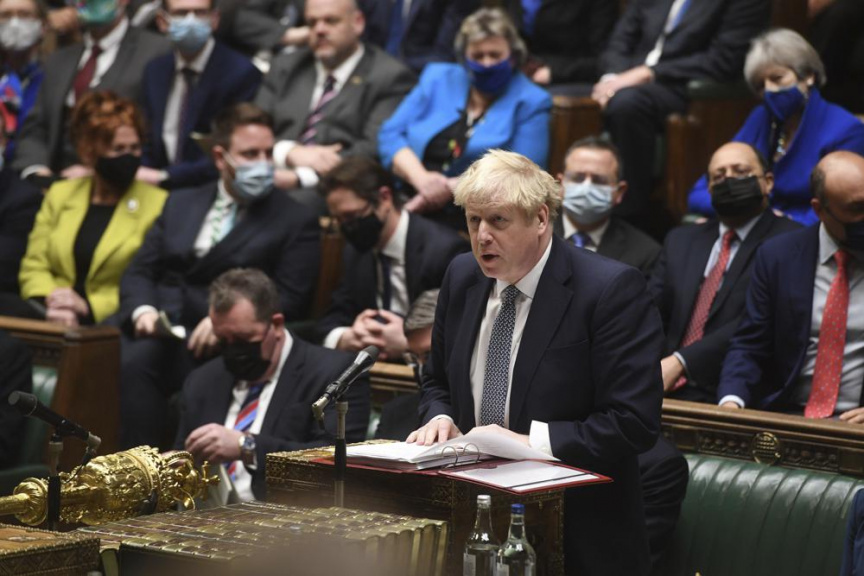 LONDON (AP) — Prime Minister Boris Johnson apologized Wednesday for attending a garden party during Britain’s first coronavirus lockdown, but brushed aside demands that he resign for breaching the rules his own government had imposed on the nation.

The apology, which stopped short of admitting wrongdoing, was Johnson’s attempt to assuage a tide of anger from the public and politicians over accusations he and his staff repeatedly flouted pandemic restrictions by socializing when it was banned.

The “partygate” scandal could become a tipping point for a leader who has weathered a series of other storms, with some members of Johnson’s governing Conservative Party saying he must quit for breaking the rules.

Douglas Ross, the leader of the party’s Scottish wing, said Johnson’s “position is no longer tenable,” and “I don’t think he can continue as leader of the Conservatives.”

Trying to calm the furor, Johnson acknowledged for the first time Wednesday that he went to a May 2020 garden party at his Downing Street office, though he said that he had considered it a work event to thank staff for their efforts during the pandemic.

“I want to apologize,” Johnson told lawmakers during his weekly Prime Minister’s Questions session in the House of Commons. “With hindsight, I should have sent everyone back inside.”

An invitation to “bring your own booze” to a “socially distanced drinks” gathering was emailed to about 100 government staff by a senior prime ministerial aide — though Johnson’s office says he did not receive it.

Opponents and allies alike have been demanding Johnson come clean about the party, held when Britons were banned by law from meeting more than one person outside their households to curb the spread of the coronavirus. The gathering happened as millions were cut off from family and friends, and even barred from visiting dying relatives in hospitals.

Johnson said he understood the rage of people who “have made extraordinary sacrifices over the past 18 months ... at the thought that people in Downing Street were not following those rules” — though he didn’t explicitly admit that he had broken any regulations and said the gathering might have been “technically” within the guidelines.

Johnson has previously said he and his staff followed the rules at all times.

Hannah Brady, whose father died in May 2020, accused Johnson of pouring “salt into the wounds of those who have already lost so much to this pandemic.”

“If restrictions are needed to protect lives in the future, people will simply laugh at him,” she said. “He has no moral authority and will cost lives.”

“He’s finally been forced to admit what everyone knew, that when the whole country was locked down he was hosting boozy parties in Downing Street,” Starmer said. “Is he now going to do the decent thing and resign?”

Johnson instead urged people to await the conclusions of an investigation by senior civil servant Sue Gray into several alleged parties by government staff. Gray, a public service veteran with a reputation as a straight-shooter, is expected to report by the end of the month.

Johnson did not say what he would do if Gray found he was at fault.

Such a finding would increase the chances of restive Conservatives calling for a no-confidence vote in their leader. Under party rules, such a vote can happen if 15% of Conservative lawmakers demand it. If it passed, the party would elect a new leader, who would take over as prime minister.

Wednesday’s admission came amid a mounting list of troubles for Johnson, who already faced accusations that his Conservative government flouted pandemic rules at other times, by hosting garden gatherings, Christmas get-togethers and office quiz nights in Downing Street, which is both the prime minister’s home and his office. He is also facing disquiet after allegations of financial and ethical misconduct against him and his government.

A string of opposition lawmakers accused Johnson of lawbreaking, lying and debasing his office.

Johnson can shrug off opposition criticisms — as he has during previous scandals — since his Conservatives have an 80-seat majority in the House of Commons. More worryingly for the prime minister, many members of his own party are increasingly concerned about his judgment and leadership.

The Conservatives picked Johnson as leader in 2019 for his upbeat manner and popular touch, despite the serial allegations of rule-bending and dishonesty that have followed him through his twin careers as journalist and politician. The choice appeared vindicated when he led the party to a big election win in December that year.

But support inside the party is being eroded by discontent over continuing pandemic restrictions, which some Conservatives view as draconian, and the growing list scandals. The question now is whether “partygate” might be a scandal too far.

The Conservatives have a history of ousting leaders if they become a liability — and a recent surprising loss in a special election for a district the party held for more than a century has increased their jitters.

“I think this apology has bought some time, and we will see what happens,” he said.

“Politically the prime minister is a dead man walking,” he said.