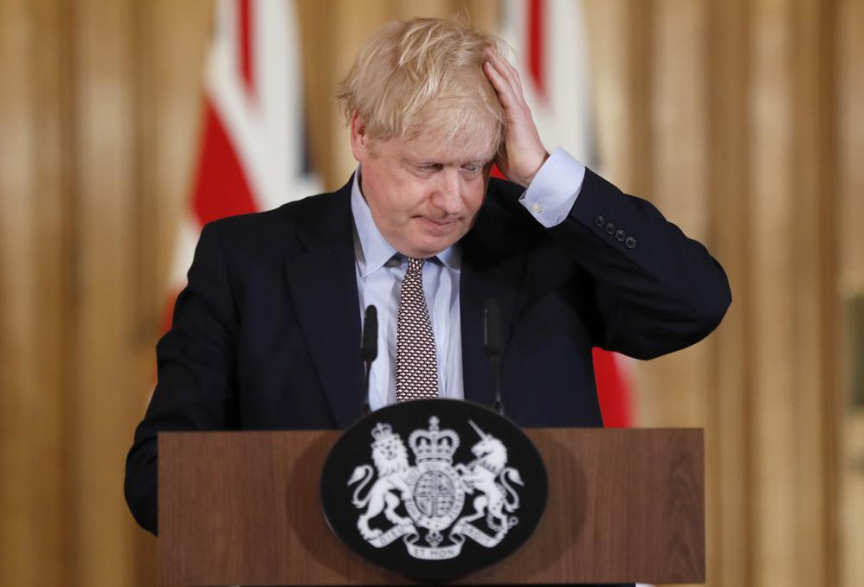 LONDON (AP) — British Prime Minister Boris Johnson faced a wave of public and political outrage on Tuesday over allegations that he and his staff flouted coronavirus lockdown rules by holding a garden party in 2020 while Britons were barred by law from meeting up with more than one person outside their households.

Opposition politicians called for a police investigation after broadcaster ITV published a leaked email invitation to “socially distanced drinks” in the garden of the prime minister’s Downing Street office and residence. The email from the prime minister’s private secretary, Martin Reynolds, was sent to dozens of people and urged attendees to “bring your own booze.”

The event was scheduled for May 20, 2020 — the same day the government held a televised news conference to remind people that group gatherings were banned indoors and out. London’s Metropolitan Police force also published a reminder that day.

The police force said Tuesday it was “in contact with” the government over the party claims, which follow allegations of several other rule-breaking gatherings in Downing Street during the pandemic. A senior civil servant who was looking into those accusations will also investigate the latest ones.

Johnson has insisted he personally broke no rules, but British media reported Tuesday that the prime minister and his wife, Carrie Johnson, attended the garden gathering.

But outrage is mounting since this is not the first time Johnson’s Conservative government has been accused of flouting pandemic rules that imposed the most severe restrictions on Britons’ individual freedoms since World War II.

During the first lockdown, which began in March 2020 and lasted for more than two months, gatherings were banned with a few exceptions. Millions of people were cut off from friends and family, and even barred from visiting dying relatives in hospitals

While Johnson has weathered the criticism thus far, his problems are piling up. Support for him in his own party is being eroded by discontent over continuing pandemic restrictions, which some Conservatives view as draconian. He is also facing disquiet about his judgment after a slew of financial and ethical misconduct allegations against him and his government.

Britain is not scheduled to hold a national election until 2024, so Johnson does not face an imminent verdict from voters. His party is another matter. The Conservatives have a history of ousting leaders if they become a liability — and a recent surprising loss in a by-election for a district the party held for more than a century has increased their jitters.

On the day of the garden party in May 2020, 268 people with the coronavirus died in Britain, according to official figures, bringing total deaths to more than 36,000. The total now stands at over 150,000, the highest in Europe after Russia.

Lyndsay Jackson, whose mother died of COVID-19 that month, said the government showed “contempt for ordinary people and for the difficulties we were all facing.”

“I wasn’t able to be with her when she died, I wasn’t able to hold her hand. … I couldn’t even hug my brother after the funeral,” said Jackson, a member of the group COVID-19 Bereaved Families for Justice. She told Sky News that Johnson was “beneath contempt.”

The latest claims will be investigated by senior civil servant Sue Gray, who was appointed by the government to look into earlier allegations that staff in Johnson’s office held lockdown-breaching Christmas parties in 2020.

The opposition Labour Party demanded that Johnson answer questions about the allegations in Parliament — but the government sent a junior minister, Michael Ellis, to face lawmakers instead. Ellis apologized “for the upset that these allegations have caused” but said he could not comment further because an investigation was underway.

Health Minister Edward Argar said he understood why people would be “upset and angry,” but said he would not “pre-judge” the outcome of Gray’s inquiry.

“How can he lead the country through these difficult times, get people to follow public health advice, if he has so flagrantly breached the rules?” Miliband said on BBC radio.

Worryingly for Johnson, it was not just opposition politicians expressing anger. The latest claims added fuel to growing concern inside the governing Conservatives about the prime minister’s leadership.

The right-of-center party picked Johnson as leader in 2019 for his upbeat manner and popular touch, a choice that appeared vindicated when he led the Tories, as the party is known, to a big election win in December 2019.

But the pandemic has shaken his authority. He has faced criticism for not reacting quickly enough to lock the country down, for frequent policy U-turns and, most recently, for the allegations he and his staff did not follow their own rules.

Ruth Davidson, former leader of the Conservatives in Scotland, said many people would “never forgive” the “utterly indefensible” garden party.

“It just makes a mockery of this idea that we were doing a national endeavor to keep each other safe,” she said.