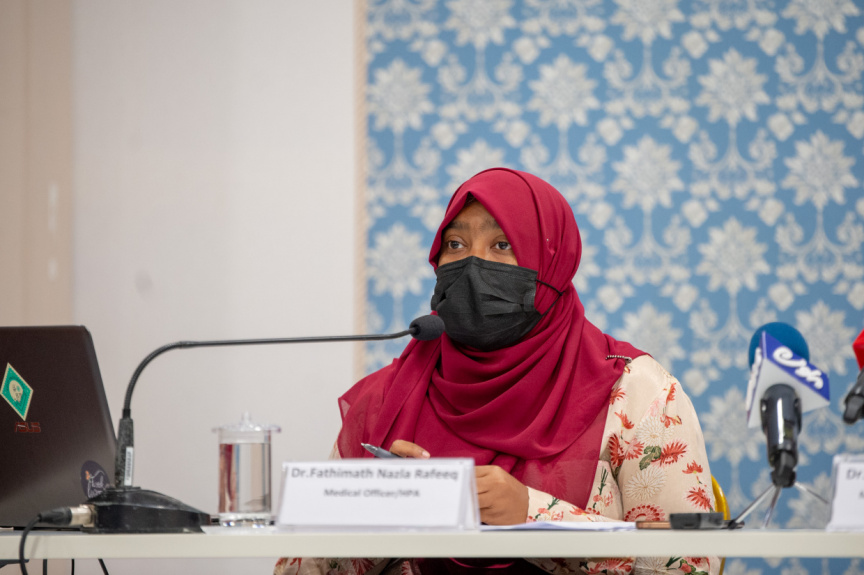 Health Protection Agency (HPA) states health authorities expect cases of the Omicron coronavirus variant to increase across Maldives in the coming days, and peak at the end of January or beginning of February.

In a press conference on Tuesday morning, Health Emergency Operations Center (HEOC)’s spokesperson Dr. Fathimath Nazla Rafeeg said that Omicron is spreading at a rapid rate in countries with high cases of the new variant, taking just one to three days for cases to double.

Half of the local cases of Omicron are from the greater Male’ region. One of the cases in Male’ is linked to K. Maafushi – which has confirmed three cases. The remaining case is from Dh. Kudahuvadhoo.

Noting the discovery of local transmission of Omicron in the populous Maldivian capital, Nazla said authorities expect cases of Omicron to surpass the now-dominant Delta variant in the coming days.

“Most of the cases in the previous Delta wave were from the Male’ region. But this time around, we expect cases to increase across Maldives,” she said.

Nazla said that the country is currently more open than it had been when the Delta wave hit.

“Our projections show we will reach the peak around end of January or beginning of February. And we project this peak will be experienced not just in Male’, but nationally,” she said.

State Minister for Health Dr. Shah Mahir said that despite the increase in COVID-19 cases due to the Omicron variant, the Health Ministry aims to control the surge without shutting down the country.

Nazla, too, said health authorities were working to implement measures to control the surge that will cause least disruption to the economy and daily life.

However, measures will be revised weekly or even faster, depending on daily cases and hospitalization rate, she said.

The sample positivity rate in the capital, which stood at three percent at the end of last year, has now risen to 10 percent.

The rise in cases has led to implementation of new restrictions in the greater Male’ region, including mandatory PCR testing for outbound domestic travelers, ban on gatherings of more than 50 people, and ban on supporters from stadiums during sporting events.

New Covid facility expected to be complete in March