More frustration for Mourinho as Roma wastes lead over Juve 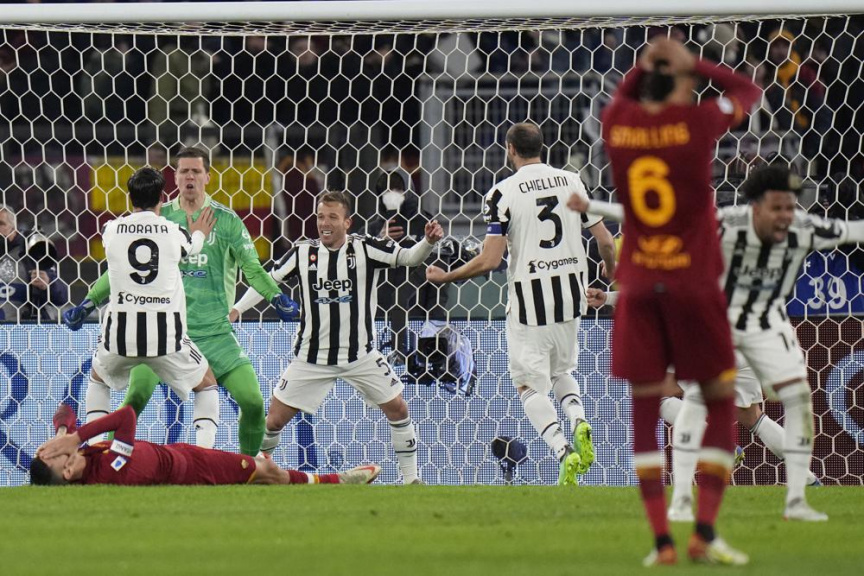 Juventus' goalkeeper Wojciech Szczesny, second left, celebrates with his teammates after saving a penalty shot by Roma's Lorenzo Pellegrini, bottom, during the Italian Serie A soccer match between Roma and Juventus at the Olympic stadium in Rome, Italy, Sunday, Jan. 9, 2022. (AP Photo/Alessandra Tarantino)

ROME (AP) — José Mourinho left Italy more than a decade ago as a Champions League winner, Serie A champion and Italian Cup victor after guiding Inter Milan to a memorable “tripletta” — treble.

Flash forward a dozen years and the outspoken coach’s return this season at Roma has been characterized by a series of frustrating losses — the latest a 4-3 home defeat to Juventus in the Italian league on Sunday.

Disappointing results for Roma include a derby loss to Lazio, a 3-0 beating by Mourinho’s former club Inter, and now second defeats this season to both AC Milan and Juventus in the space of four days.

Making matters even worse is that Roma wasted a two-goal advantage over Juventus on Sunday.

“For 70 minutes we had total control,” Mourinho said. “If the match had finished in the 70th minute we would have been talking about an extraordinary game. Unfortunately it didn’t end there and all of our limits were exposed, including that of our bench.”

With Mourinho drawing more and more from his various spells in the Premier League, Roma became the first Serie A club in modern times to start three English players as newly signed Ainsley Maitland-Niles joined Chris Smalling and Tammy Abraham in the opening 11.

Abraham opened the scoring with a header early on and Henrikh Mkhitaryan and Pellegrini — with a perfectly struck free kick — made it 3-1 for Roma after an equalizer from Paulo Dybala.

Juventus lost striker Federico Chiesa to apparent injury before the break but still managed to come out strong in the wild second half.

Juventus is fifth, three points behind Atalanta and the final Champions League berth, while Roma is seventh.

“I’m here to help these guys improve. I never thought my personality would be enough or that it would be easier to work here,” Mourinho said. “I want to take advantage of the three years on my contract to make an impact on this squad, but obviously I need help from the club.”

Center back Alessandro Bastoni scored one goal and set up another as Serie A leader Inter beat visiting Lazio 2-1 to avenge its only defeat of the season.

First, Bastoni scored with an accurate, low shot from beyond the area, then he provided a cross that Milan Škriniar headed in after Ciro Immobile had equalized for Lazio.

Inter, which has a game in hand, again moved one point ahead of AC Milan.

In October, Inter lost 3-1 at Lazio, the former club of coach Simone Inzaghi.

Ibrahimović opened the scoring with barely two minutes on the clock. It was the 80th team the veteran forward has scored against in the top five European leagues. Ibrahimović and Ronaldo — who did so against Burnley on Dec. 30 — are the only players to reach that milestone since 2000.

Milan was missing more than 10 players due to coronavirus, injuries and African Cup of Nations duty.

Atalanta started 2022 in emphatic fashion as it won 6-2 at COVID-hit Udinese.

It was Atalanta’s first match of the new year after Thursday’s home match against Torino was postponed because of a number of coronavirus cases in the visiting squad.

Udinese had 12 players out with COVID-19 but the match went ahead and Atalanta was 3-0 up by halftime following goals from Mario Pašalić, Luis Muriel and Ruslan Malinovskyi. Muriel added a second after the break and Joakim Mæhle also netted his first goal for Atalanta, three minutes before Matteo Pessina’s stoppage-time effort.

Atalanta remained fourth, two points behind Napoli but having played a match less.

Napoli beat Sampdoria 1-0 thanks to an acrobatic, first-half goal from Andrea Petagna.

Will he stay or will he go? Djokovic’s hearing underway