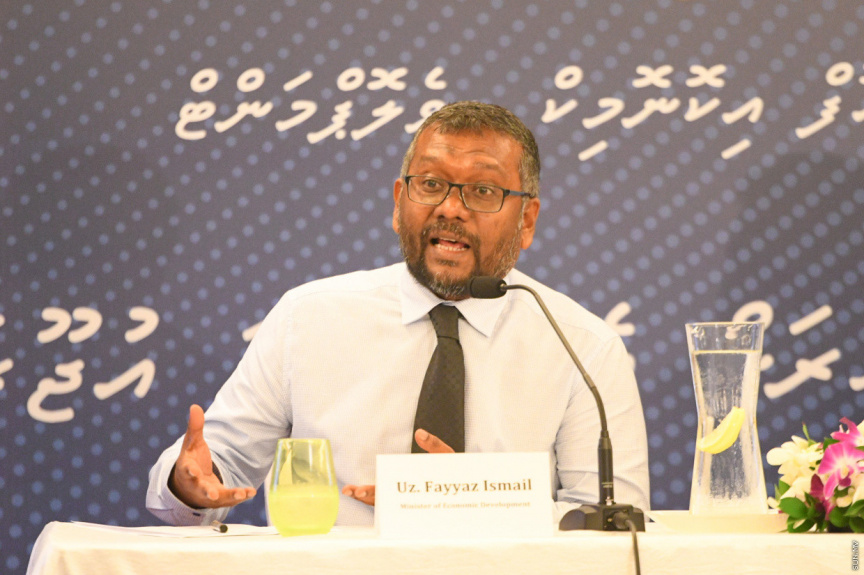 Economic Minister Fayyaz Ismail has stated that revolutionary changes would be seen to the economy in the upcoming days, with the prices of dollar becoming much cheaper.

Minister Fayyaz made this statement whilst speaking at the ceremony held last night at Komandoo to launch the campaign of MDP’s candidate, Mohamed Rashid, for the Komadoo parliamentary seat by-elections.

“Water and sewerage projects at over 100 islands well underway. Have heard of farming plots. Also hearing the establishment of many powerhouses or its relocations. Many schools and classrooms have been developed. Many mosques have been too. Talks are about how much such infrastructural development has been carried out within the past three years,” he detailed.

Minister Fayyaz also noted that the prices of internet have been brought down – with people having stopped complaining regarding slow and expensive internet.

Highlighting that minimum wage has also been declared – he said that the government has initiated and carried out many developmental efforts that have not been done so within the past 30 years, at a period of time the world has come to halt. He further stressed that these were matters previous governments had failed to address.

“Still will say slow, and have done nothing,” he added.

Stating that it is President Ibrahim Mohamed Solih who had boldly brought major changes to the rights of businessmen and workers – Minister Fayyaz said that many revolutionary changes will be brought to the economy within the upcoming days as well. On this note, he said that the prices of dollars will be made cheaper.

“Do not doubt at all. Dollars will be made cheaper in the future as well,” he had said.

Noting that there were many obstructs still faced in light of the COVID-19 pandemic – Minister Fayyaz assured that the government will work on easing the difficulties faced by its people.