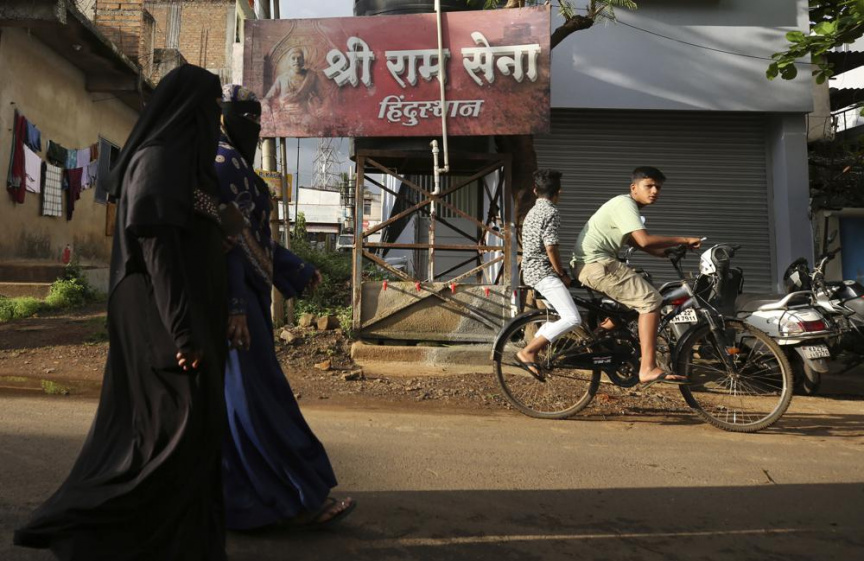 NEW DELHI (AP) — Police in India have detained a man and a woman alleged to be involved in the offering for sale of prominent Muslim women on a fake online auction website, according to government officials, in a case that has sparked outrage across the country.

The cyber unit of the Mumbai Police detained the two suspects following a complaint from one of the targeted woman. It wasn’t clear whether the two created the website.

Police brought charges against the man, a 21-year-old engineering student, and said they were investigating the woman further.

Photographs of more than 100 prominent Indian Muslim women, including journalists, activists, film stars and artists, were displayed last weekend without their permission on a website and put up for fake auction. The women listed on the website also included the 65-year-old mother of a disappeared Indian student and Pakistani Nobel laureate Malala Yousafzai.

The website, which was taken down within 24 hours, was called “Bulli Bai,” a derogatory slang term for Indian Muslims. Though there was no real sale involved, the Muslim women listed on the website said the auction was intended to humiliate them, many of whom have been vocal about rising Hindu nationalism in India and some of the policies of Prime Minister Narendra Modi.

The website was hosted on GitHub, a San Francisco-based coding platform. A company spokesperson said GitHub had taken down the user account that had hosted the website on its platform, and that it would cooperate with investigating authorities.

Police in at least three states said they have opened investigations into the incident and filed criminal complaints against developers of the website, based on the complaints of the targeted women.

This is not the first time Muslim women were listed on a fake auction website. Last June, a similar website called “Sulli Deals,” also a derogatory term for Muslim women, was created for the same purpose. That website remained online for weeks and was only taken down by authorities after complaints from victims. Police opened an investigation into that case, but no one was arrested.

Indian women, particularly Muslims, have often found themselves the target of hate and abuse on social media platforms, including Twitter. Outspoken Muslim women, including journalists and activists and those critical of Modi and his Hindu nationalist party, have received threats of rape and violence.

Many of the victims say the fake auction website is the latest attempt to intimidate them.

Khadija Khan, a lawyer and journalist with Bar & Bench website, said she received a Twitter notification on New Year’s Eve that informed her she was tagged in a tweet that displayed her picture as part of the fake auction. The account has since been suspended.

Khan’s initial reaction was to report the tweet and block the user, dismissing it as spam. But she soon received messages from her friends and colleagues who confirmed to her that she was also on the list.

“My initial reaction was indifference and dismissal because we are used to daily trolling but by the next day, it had turned into shock and horror. Realizing what it actually was gave me nightmares,” Khan said.

Khan found support from her family and colleagues, but the incident left her shaken.

“It’s a message that ‘Look! We can brazenly humiliate and sell Muslim women online and still go scot free while they are still vying for some modicum of justice,’” Khan said.

Indian held for unruly behavior with woman on flight