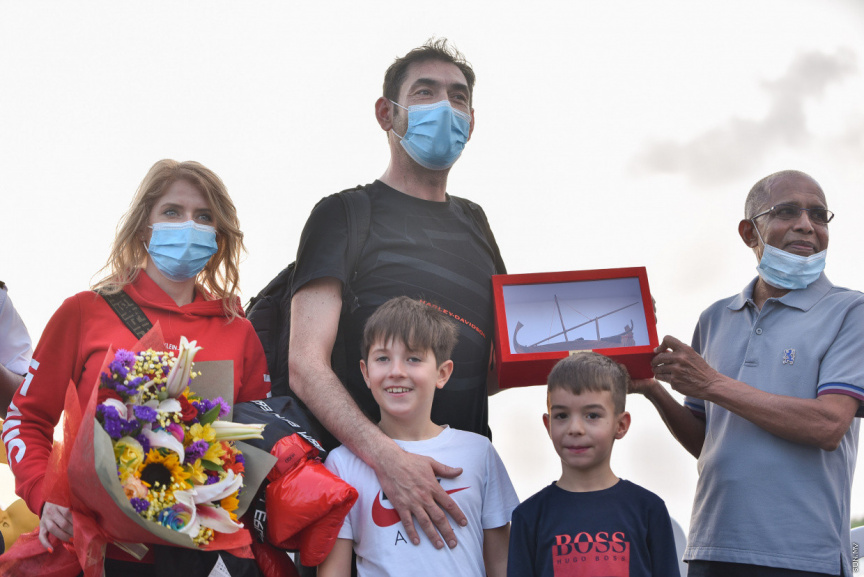 Maldives has welcomed 1.3 millionth tourist for the year this evening – successfully reaching the target set for the year.

The 1.3 millionth tourist is identified as a Romanian national, Constantin Stelian Emil. He arrived in the Maldives this evening via a GullivAir flight, along with his wife and two children.

Not Emil’s first visit to Maldives

This is Emil’s second visit to Maldives. He first came to the Maldives five years ago, with his wife, on their honeymoon.

Emil who is scheduled to spend seven days in the Maldives will be staying at Bandos Island Resort, according to him.

During his first trip to Maldives, Emil said that he and his wife stayed at Paradise Island Resort. He detailed that the vacation was relaxing and happy subsequent to which he desired to return to Maldives again. However, he said that obstructions faced in the light of the COVID-19 pandemic have only allowed the chance for him to return to Maldives this year.

With being bestowed the honor of being the 1.3 millionth tourist for the year 2021 – Emil said that he hoped the country reaches the 2 million milestone next year. He also congratulated Maldives for achieving this year’s target.

New highest reached for arrivals on a single day

Next year’s target is 2 million tourists

Subsequent to achieving this year’s targets – tourism industry partners are extremely hopeful for next year as well.

With a large number of individuals working in the tourism sector at present – the government’s aim for next year is to achieve the 2 million tourist arrival milestone next year with cooperation from all.

Speaking at the ceremony held to welcome the 1.3 millionth tourist for this year, Tourism Minister Mausoom said that such milestones are achieved in the tourism sector due to the hard work of all industry partners.

“This is a very happy occasion. Meanwhile, yesterday we celebrated National Unity Day. Moreover, we welcome the most number of tourist arrivals on a single day since border reopening yesterday as well.  The successes in the tourism sector is also because of the work done by all in unison. This is very hard work. About one and half years have passed with the industry laying on its stomach. The industry faced many difficulties. Maldivian tourism industry was strengthened by the hard work of all involved in the industry,” he had said.

MMRC’s Managing Director Thoyyib also spoke at the ceremony – where he highlighted that Maldivian tourism has achieved significant awards despite the difficulties posed by the pandemic.

“Despite all the challenges, 2021 has been a great year for the Maldivian tourism sector, achieving many milestones and receiving many accolades and awards, one of which was the prestigious World Travel Awards leading destination 2021 title. Reaching 1.3 million visitors is not a small achievement considering how volatile the global tourism situation has been throughout the year. This is all thanks to the consistent and courageous efforts of all frontline workers, the government, ministries, MMPRC, other stakeholders, NGO’s and associations. We have many plans for the next year and will hopefully bring in even greater achievements as we proceed,” he had said.

Dhiguvelidhoo to be developed as tourist resort

Canareef Resort to reopen next week after two years