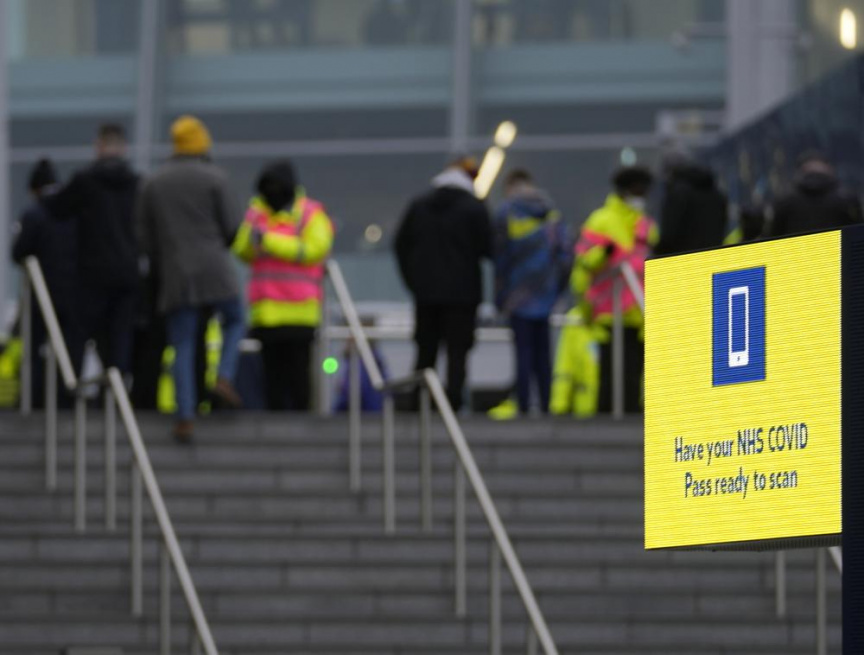 Stewards check the fans for their COVID-19 documents at the entrance of the Tottenham Hotspur Stadium ahead of the English Premier League soccer match between Tottenham Hotspur and Liverpool in London, Sunday, Dec. 19, 2021. (AP Photo/Frank Augstein)

LONDON (AP) — A coronavirus outbreak at Everton has forced the postponement of the club’s match at Burnley, the Premier League said Friday.

It’s the third match of the Boxing Day lineup to be postponed as part of a Sunday program that still features six games. Defending champion and league leader Manchester City hosts 2016 winner Leicester among the six games scheduled to go ahead Sunday.

The Premier League has now called off 13 matches because of coronavirus issues in two weeks, with players having to isolate after testing positive or if they are unvaccinated and a close contact of a COVID-19 case.

Everton had asked for the postponement citing virus cases and injuries, and the league’s board “regrettably approved” the request.

“The Board reviewed the club’s request today to postpone the match following further injuries to their squad. They concluded that the club will not be able to fulfill their fixture this weekend as a result of an insufficient number of players available to play due to COVD-19 cases and injuries,” the league said in a statement.

On Thursday, coronavirus outbreaks at Leeds and Watford forced postponements of their Sunday matches. Leeds was scheduled to travel to Liverpool and Watford was set to play at Wolverhampton.

“While recognizing a number of clubs are experiencing COVID-19 outbreaks, it is the clubs’ and the league’s collective intention to continue the current fixture schedule where safely possible,” the league said.

Tottenham coach Antonio Conte described Thursday’s virtual meeting between the Premier League and all 20 top-flight bosses as a waste of time.

“If I have to be honest, it was a meeting that we tried to speak and some coaches tried to speak, to ask about solutions but I think everything was decided,” Conte said.

Asked if it was a waste of time, the Italian added: “I think so. Because when you have a wall in front of you, you can speak and ask what you want but every decision was (already) taken.”

Tottenham, which has just returned from an enforced two-week break due to a COVID outbreak at the club, hosts Crystal Palace on Sunday before visiting Southampton on Tuesday.

Palace coach Patrick Vieira is hopeful his team will be able to play Sunday’s fixture but revealed “a couple of cases” of coronavirus at the club. He did not give more details. The Eagles have not played for 10 days after last weekend’s match at Watford was postponed due to the opposition dealing with a COVID-19 outbreak in their squad.

“We hope we are going to be okay but when you are looking at the number of cases around (the country), we start to be worried,” Vieira said.

Chelsea being sold to Dodgers owners for record $3BN

Tuchel says ‘zero problem’ between him and Pulisic