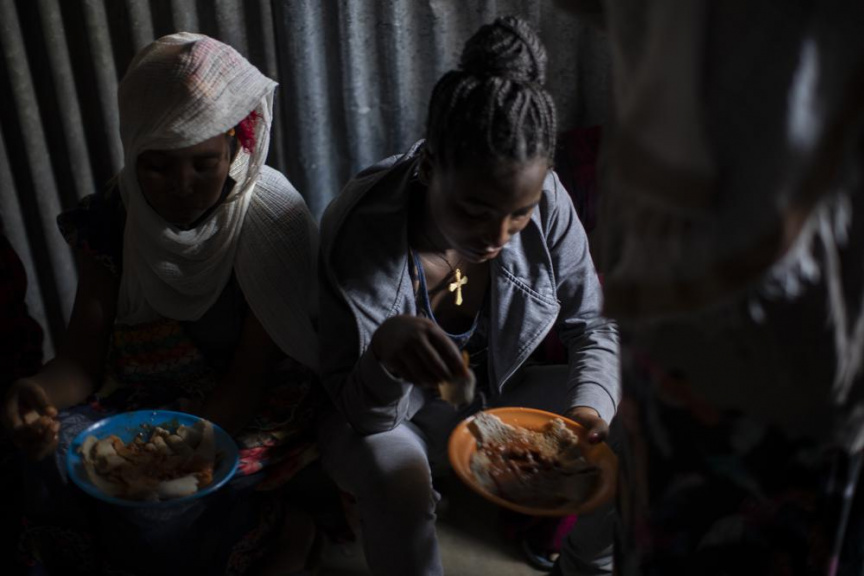 Displaced Tigrayan women, one wearing an Ethiopian Orthodox Christian cross, sit in a metal shack to eat food donated by local residents at a reception center for the internally displaced in Mekele, in the Tigray region of northern Ethiopia, on May 9, 2021. (AP Photo/Ben Curtis)

NAIROBI, Kenya (AP) — An estimated 22 million Ethiopians will require humanitarian assistance in 2022, according to a United Nations report.

Ethiopia’s already high humanitarian needs are expected to rise in the coming year due to the ongoing conflict, drought, flooding, disease outbreaks and locust infestation, the U.N. Office for the Coordination of Humanitarian Affairs stated.

“Humanitarian needs remain high in several parts of Ethiopia with at least 20 million people requiring some form of humanitarian assistance until the end of the year,” the report says adding the number of people depending on emergency food assistance is increasing in the conflict-stricken regions of Tigray, Afar and Amhara.

“Also, urgent action is needed to reverse deepening drought impacts in southern and eastern Ethiopia. The continuous drought-like condition in the south of Oromia and Somali regions is of particular concern,” said the report.

The Amhara region, where several cities and towns were controlled by Tigray forces from July until recently, has registered the largest increase with 3.7 million people in urgent need of assistance. About 4 million internally displaced people across Ethiopia, the majority of whom have been forced to leave their homes due to the conflict in search of safety and assistance, according to U.N estimates.

The East African country will need aid worth about $1.4 billion, of which $892 million must still be raised, said the report.

Ethiopian officials confirmed drought in several areas across the country and said they are distributing food aid to some affected parts. But aid groups state their activities are still restricted in many parts of the embattled Tigray region as government forces have blocked deliveries of aid to the region.

Ethiopia has been involved in a deadly conflict with the Tigray People’s Liberation Front forces from the northern Tigray region since November 2020. The conflict is estimated to have taken the lives of tens of thousands of people and displaced millions of others.

After a sweeping campaign in early July in which they won control of large parts of the neighboring Amhara and Afar regions, the Tigray forces are retreating to their region claiming they want to give a chance for negotiations and peace. But government officials state the Tigray forces are crushed and have been forced to retreat.

The Ethiopian government has been hitting Tigray regional forces with drone strikes over the past week, and Tigray region media outlets report that dozens of people have been killed, including women and children.

In a first, Somalia-based al-Shabab attacks in Ethiopia