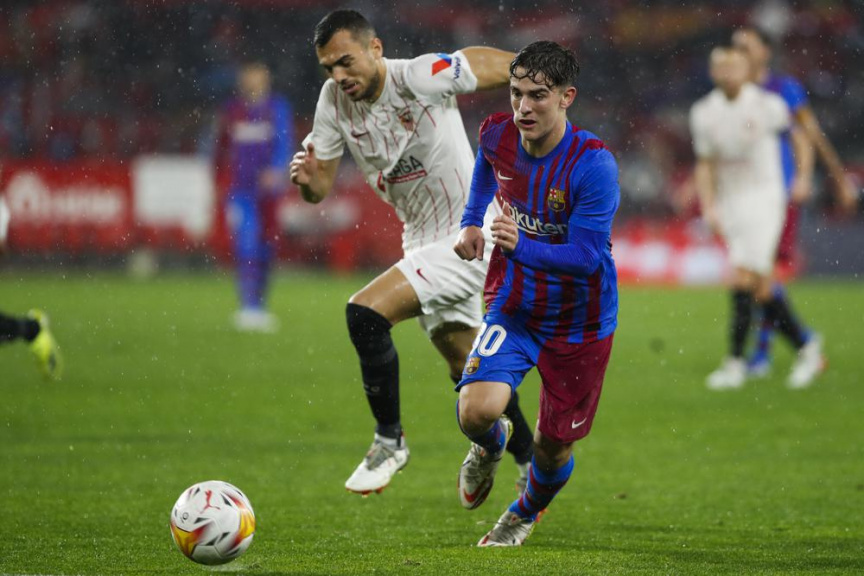 Barcelona's Gavi, right, runs after the ball next to Sevilla's Joan Jordan during the Spanish La Liga soccer match between Sevilla and Barcelona at the Ramon Sanchez-Pizjuan stadium, in Seville, Spain, Tuesday, Dec. 21, 2021. (AP Photo/Angel Fernandez)

BARCELONA, Spain (AP) — Sevilla was held 1-1 at home by Barcelona on Tuesday in a match the hosts finished with 10 men after defender Jules Kounde was sent off with a direct red card for throwing the ball into an opponent’s face.

Papu Gómez put Sevilla ahead in the 32nd minute as steady rain fell upon the Sánchez Pijuán field. Ronald Araújo headed in Ousmane Dembele’s corner kick to equalize for Barcelona just before halftime.

The match was deadlocked in the 64th when Kounde, who last summer was rumored to be close to a move to Chelsea, lost his cool. After Barcelona defender Jordi Alba had twice bumped him in the back while disputing a ball going out of bounds, Kounde grabbed the ball and slung it into his face from close range. The referee did not hesitate to show him a red card.

“It was uphill after the sending off,” Gómez said. “I am sure (Kounde) is angry and disappointed. When you make a mistake like that you feel horrible. He will take a look at what he did and make sure it doesn’t happen again.”

Barcelona increased its control with an extra man and only the woodwork saved Sevilla when Dembele curled a shot off the far post with six minutes to play.

The stumble left second-place Sevilla five points behind leader Real Madrid, which visits Athletic Bilbao on Wednesday in a match to be played without several players on both teams due to coronavirus infections.

“The team is competing, it is improving, so I leave feeling proud of my team,” Barcelona coach Xavi Hernández said. “But we are not happy with the result. Today was a day to win and move into the Champions League zone.”

As both defenses held the attacks in open play, the goals came from well-executed corner kicks.

Gómez ditched his mark by curling from the far post back to the heart of the area where he used one touch to drive Ivan Rakitic’s pass through the crowded area and into the corner of the net.

Gómez, an attacking midfielder, also helped Karim Rekik keep Dembele in check on his repeated attempts to dribble free on the right flank.

Dembele, however, turned passer to help get the equalizer seconds before halftime. Araújo outjumped Fernando to send Dembele’s corner kick into the far corner with a slicing header.

After Kounde was sent off, striker Youssef En-Nesyri went on as a substitute for Sevilla after having missed 10 matches with a muscle injury.

Xavi again placed his trust in Barcelona’s youngest players. With both Memphis Depay and Ansu Fati injured, he started the match with Ferran Jutlgà as striker and finished it with 17-year-old Gavi Páez as a “false nine.” Gavi almost snatched a winner with a header that missed by inches.

Gerard Moreno and Boulaye Dia both scored braces to lead Villarreal to a 5-2 win over Alavés.

Moreno’s first goal to open the scoring culminated a superb team buildup. Alavés rallied to pull level at 2-2 from goals by Pere Pons and Joselu Mato, but Dia, Yeremy Pino and Moreno turned it into a rout.