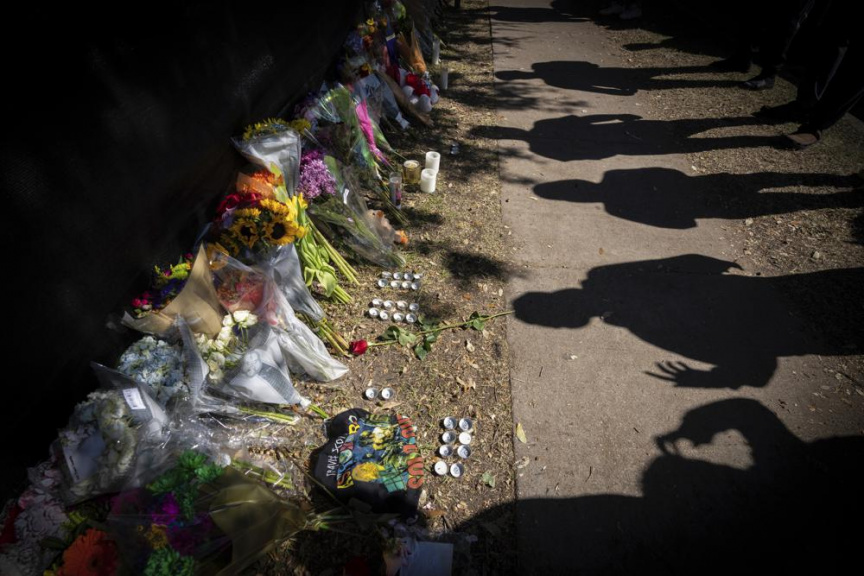 FILE - Visitors cast shadows at a memorial to the victims of the Astroworld concert in Houston on Nov. 7, 2021. (AP Photo/Robert Bumsted, File)

HOUSTON (AP) — The 10 people killed at the Astroworld music festival in Houston all died from compression asphyxia during a massive crowd surge in which attendees were packed so tightly that many could not breathe or move their arms, officials announced Thursday.

According to a medical expert, what likely happened was the pressure from the large crowd at the event was so great that it quickly squeezed all the air from the lungs of the 10 victims, causing them to pass out within a minute or so and die because critical organs, such as the heart and brain, were depleted of oxygen.

Dr. George W. Williams, a critical care anesthesiologist with the University of Texas Health Science Center at Houston, said the hundreds and possibly thousands of pounds of pressure the victims likely felt on their chests was “like being crushed by a car.”

“Seconds really do count to allow for that person to recover and to be rescued from that terrible event ... The organs like the brain and the heart start getting injury and after three to four minutes that injury becomes so severe to where you can’t bring that person back,” said Williams, who also works at Harris Health LBJ, one of the health science center’s teaching hospitals.

Medical examiners with the Harris County Institute of Forensic Sciences in Houston had to wait several weeks following the Nov. 5 concert by rap superstar Travis Scott for additional test results before making final determinations on cause and manner of the deaths. The manner of the deaths was ruled as an accident.

The 10 people who died were among 50,000 who attended the festival and were in the audience when Scott’s concert turned deadly.

The youngest victim was 9-year-old Ezra Blount. The others who died ranged in age from 14 to 27. Medical examiners said contributing factors in one man’s death were cocaine, methamphetamine and ethanol, a form of alcohol.

Some 300 people were injured and treated at the festival site and 25 were taken to hospitals.

Williams said what happened at the Astroworld festival would not normally take place at say a party or other event as a very large crowd would be needed to create the conditions in which people would have the air squeezed out of their lungs because of the force on their chest, lose consciousness and die.

More than 300 lawsuits have been filed over injuries and deaths at the concert.

Alex Hilliard, an attorney representing Ezra Blount’s family, said the news of how the victims died is “devastating” to their families.

“There is not going to be one single family member that isn’t completely broken into pieces all over again after learning of this information,” Hilliard said.

“Their beloved daughter’s last living moments were surely marked with suffering, panic, and terror. It’s a horrific, inescapable image that no parent should have to endure,” Lassiter said.

Scott and the event organizers are the focus of a criminal investigation by Houston police. No one has been charged. No timetable has been set for when the investigation would be completed.

In a statement posted on Twitter, Houston police said Thursday its investigators were still conducting interviews and reviewing video footage and other evidence and would provide updates in the coming weeks on the progress of its probe.

Scott’s attorney reached out to the families of the 10 who died, offering to pay for their loved ones’ funeral costs. Several families turned down the offer.

The top elected official in the county that includes Houston, Harris County Judge Lina Hidalgo, had proposed a third-party probe of the planning and execution of the festival founded by Scott.

The Harris County administrator instead will work with other city and county entities to review security, fire and other safety plans at the county-owned NRG Park, where the festival was held.

Other members of Harris County’s governing body, known as a commissioner’s court, were concerned Hidalgo’s investigation could lead to legal liabilities for the county.

Experts in crowd safety say an investigation by neutral outsiders could help avoid potential conflicts of interest and promote transparency.

A 56-page event operations plan for the Astroworld festival detailed protocols for dangerous scenarios, including a shooter, bomb or terrorist threats, and severe weather. But it did not include information on what to do in the event of a crowd surge.

A motion is pending before the Texas Judicial Panel on Multidistrict Litigation, which is overseen by the Texas Supreme Court, on whether to consolidate all the lawsuits and have them overseen by one judge. A board of judges in Harris County had earlier this month granted a different request to have all pretrial matters in the various lawsuits be handled by one judge. But the state judicial panel issued a stay in the litigation, overruling the order by the local board of judges.

Foreigner dies after getting stuck under concrete block