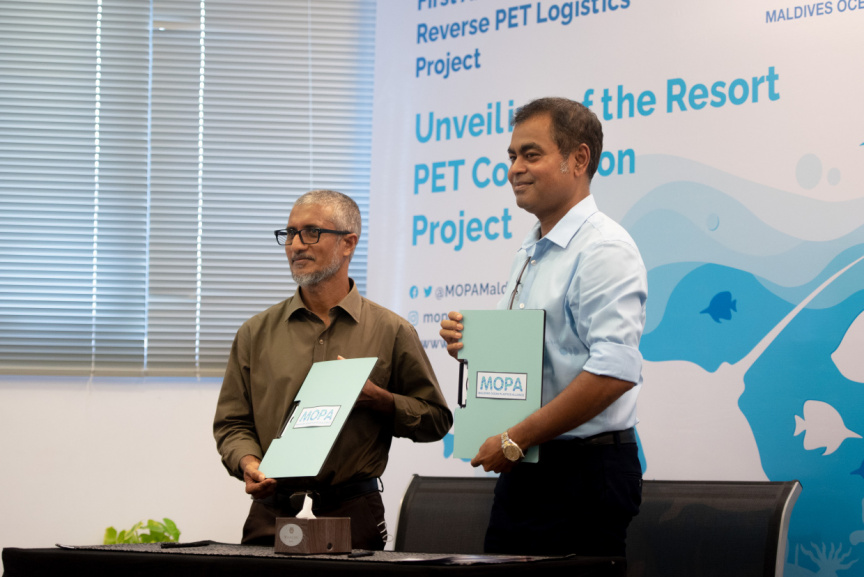 Unveiled yesterday, in conjunction with the successful completion of the first year of their ‘Plastic Reverse Logistics Project’ – MOPA said that the new project is an expansion of the aforesaid project in order to combat plastic waste pollution in the Maldives.

MOPA detailed that the purpose of ‘Resort PET Collection Project’ is to collect and recycle empty PET bottles from more than 150 tourist resorts operating across the country.

Initially, the project involved the regulation of daily post-consumer collection of PET bottles from over 120 retail outlets, including eateries, restaurants and cafés in the Greater Male’ Area. As the project marks one year since launch, it has expanded to cover 263 outlets with over 30,000kg PET bottles being collected in the span of a year.

MOPA plans on expanding the project to over 300 outlets, including that of those in Addu City.

The ‘Plastic Reverse Logistics Project’ alongside the ‘Resort PET Collection Project’ is expected to collect at least 150,000kg of PET bottles from across the country on an annual basis. It is also aimed at promoting the management of plastic waste responsibly through behavioral changes.

Collected empty PET bottles under both projects are handed over to Parley Maldives to be recycled and upcycled into everyday items like Adidas sneakers.

Maldives to benefit from new fund launched at COP26

Tax to be imposed on plastic bags starting June 2022

UN: Right to clean environment is a human right