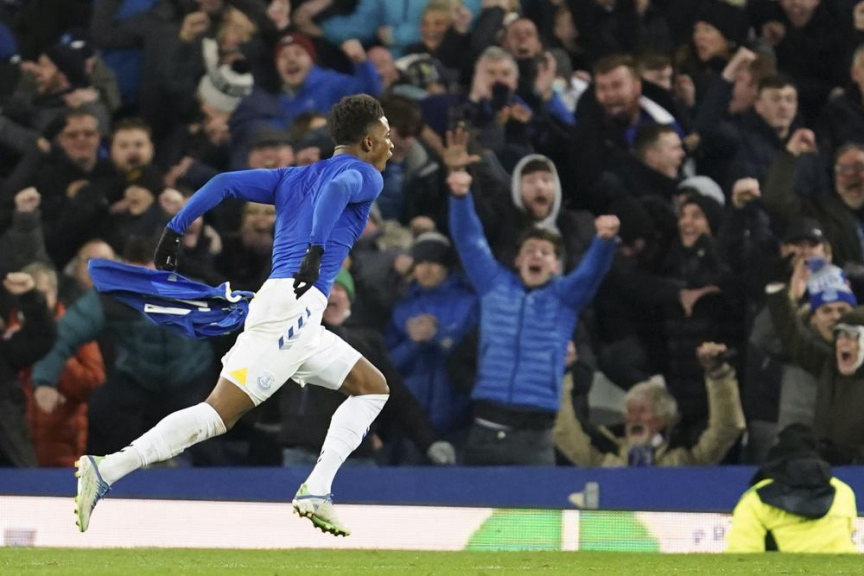 On a night of protest then jubilation inside Goodison Park, Everton ended its eight-match winless run by rallying for a 2-1 victory over Arsenal on Monday — and it was all thanks to a winger whose offseason arrival from Bayer Leverkusen for 1.7 million pounds ($2.25 million) is proving a bargain.

Gray sent in a fierce strike from the edge of the area that struck the crossbar and was headed in by Richarlison off the rebound for Everton’s equalizer in the 79th minute.

Then, from further out, Gray cut inside from the left and unleashed a right-footed shot with even more venom in the second minute of stoppage time. The ball flew in off the inside of the post and Gray celebrated by removing his jersey and wading into a section of fans beside the field.

It sparked wild celebrations inside the stadium at the end of a match that featured a walkout by some fans after 27 minutes, in a signal of their unhappiness at the Everton board’s running of the club amid the 27th season without a trophy.

Some of the fans were seen making their way toward the exits inside Goodison as play continued, with the score at 0-0.

The majority that hung around saw its team fall behind again thanks to Martin Odegaard’s volley in the second minute of first-half injury time, which put Arsenal on course for a win to climb back into fifth place.

The visitors rode their luck, with Richarlison having two goals — a header in the 43rd and a low finish in the 57th — ruled out by video review because of marginal offside decisions.

The Brazil forward kept plugging away and got his reward with the equalizer inspired by Gray, who then produced the crowning moment of the game.

“It was a crazy moment, my best moment here so far,” Gray said. “It was important to get that win. We have gone through a bad patch but we stuck together.”

It was Everton’s first win since Sept. 25 and moved the team eight points clear of the relegation zone.

“It is clear — when the fans, the players, everybody sticks together, we are stronger,” Everton manager Rafa Benitez said. “The reaction of the team to the goals that were disallowed and conceding a goal at the end of the first half, we still scored goals and reacted.

“Every player and fan is expecting that. Everybody is really pleased and hopefully it is the right step forward.”

Arsenal will regret late chances squandered by substitute strikers Eddie Nketiah, who headed against the base of the post from point-blank range when the score was 1-1, and Pierre-Emerick Aubameyang, who side-footed wide with one of the last kicks of the game.

Aubameyang, Arsenal’s club captain, was left out of the team and came on only as a substitute after Nketiah had been introduced — a decision by manager Mikel Arteta that might be viewed as something of a snub to his star player.

It was a second straight loss for Arsenal in the northwest of England, after a 3-2 at Manchester United on Thursday.

“It’s hard to say exactly what happened,” Odegaard said. “We have to do better when we have that lead. We stopped playing and gave them the game they wanted to play.”

Chelsea shakes off blues with customary win over Spurs