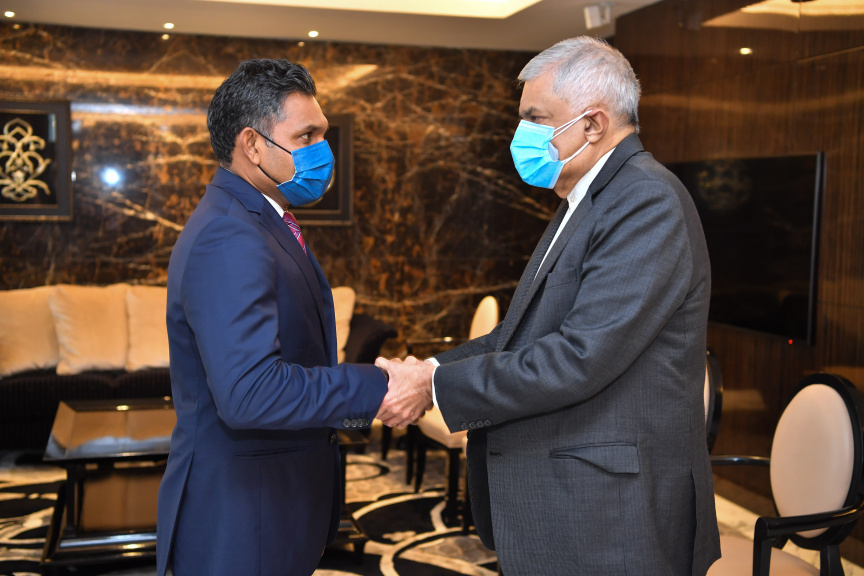 Vice President Faisal Naseem has stressed that the security of the Indian Ocean is important to the countries within the region.

During a courtesy call paid by Sri Lanka’s former Prime Minister Ranil Wickremesinghe to VP Faisal on the sidelines of the fifth Indian Ocean Conference (IOC) 2021 – VP Faisal stated that security of the Indian Ocean is extremely important to Maldives, as well as other countries within this region.

In addition to this, VP Faisal and the former Prime Minister discussed a multitude of other topics.

In this regard, they discussed the COVID-19 situation in their respective countries and how the two countries are gradually recovering from the pandemic.

VP Faisal also expressed his gratitude for the generous hospitality extended to the Maldivian population residing in Sri Lanka and highlighted Sri Lanka’s contribution to the Maldivian education sector, including vocational training and the health sector.

He also highlighted Maldives’ efforts to combat climate change. Noting that Maldives is investing immensely in environmental protection, he stressed that is time for the whole world to take action.

Former Prime Minister also inquired regarding the progress of tourism in the Maldives – to which VP Faisal replied that the sector is recovering slowly following the pandemic.

VP Faisal is currently in the UAE, to attend IOC 2021. He is accompanied by a high-level delegation from the President’s Office and the Foreign Ministry during this trip. They are set to return on Wednesday.

VP: Gov. seeks to prepare students for the 21st century