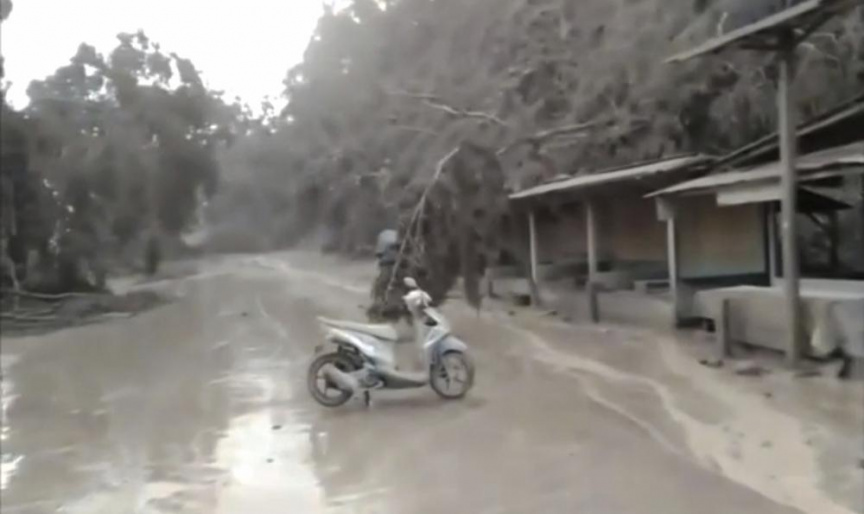 Ash covers the street in the Lumajang District in Indonesia, on Saturday, Dec. 4, 2021 after Mount Semeru’s eruption. (AP Photo)

LUMAJANG, Indonesia (AP) — The highest volcano on Indonesia’s most densely populated island of Java spewed thick columns of ash, searing gas and lava down its slopes in a sudden eruption triggered by heavy rains on Saturday. At least one villager died from burns and dozens were hospitalized.

A thunderstorm and days of rain, which had eroded and finally collapsed the lava dome atop the 3,676-meter (12,060-foot) Semeru, triggered an eruption, said Eko Budi Lelono, who heads the geological survey center.

He said flows of searing gas and lava traveled up to 800 meters (2,624 feet) to a nearby river at least twice on Saturday. People were advised to stay 5 kilometers (3.1 miles) from the crater’s mouth, the agency said.

The debris and lava mixed with the rainfall formed thick mud that destroyed the main bridge connecting Lumajang and the neighboring district of Malang, as well as a smaller bridge, Haq said.

Despite an increase in activity since Wednesday, Semeru’s alert status has remained at the third highest of four levels since it began erupting last year, and Indonesia’s Volcanology Center for Geological Hazard Mitigation did not raise it this week, Lelono said.

One man died from severe burns, and 41 others were hospitalized with burn injuries, said Indah Masdar, the deputy district head. She said two villagers were reported missing and several sand miners were trapped in isolated areas along the village river.

Television reports showed people screaming and running under a huge ash cloud, their faces wet from rain mixed with volcanic dust. The last time Semeru erupted in January, there were no casualties.

Indonesia, an archipelago of more than 270 million people, is prone to earthquakes and volcanic activity because it sits along the Pacific “Ring of Fire,” a horseshoe-shaped series of fault lines.