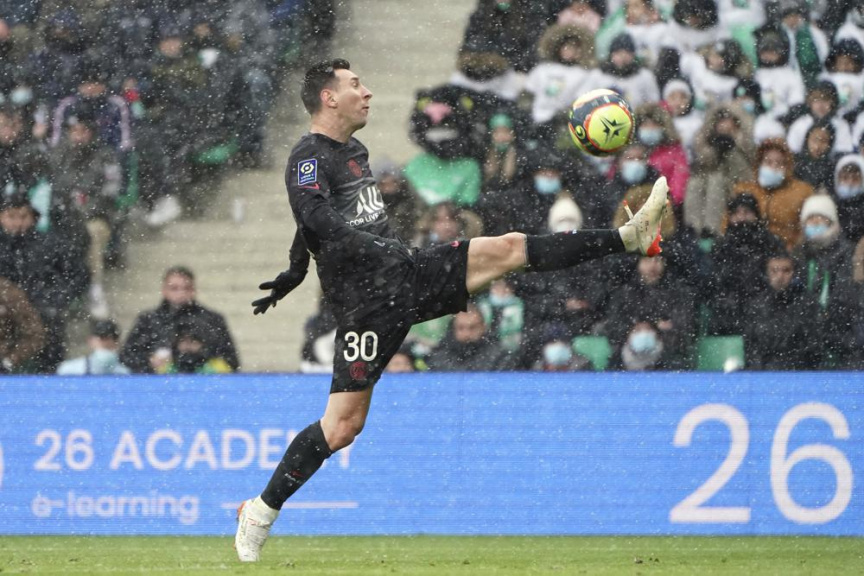 PARIS (AP) — Lionel Messi had three assists in a 3-1 win over 10-man Saint-Etienne on Sunday to help Paris Saint-Germain extend its lead atop the French league to 12 points but the victory was marred by an injury to star striker Neymar.

The Brazil forward was stretchered off in the 87th minute after twisting his left ankle under an awkward challenge from Yvann Macon.

“Let’s recover from this,” Neymar said on his Instagram account. “Unfortunately these setbacks are part of an athlete’s life. It is what it is, let’s put our heads up high and let’s go at it! I will come back better and stronger.”

Saint-Etienne opened the scoring against the run of play in the 23rd minute of the game played in snowy conditions. Wahbi Khazri picked out Timothee Kolodziejczak, whose shot was saved by Gianluigi Donnarumma. But the rebound fell to Denis Bouanga, who beat the Italy goalkeeper.

But Saint-Etienne’s task was made much harder on the stroke of halftime when Kolodziejczak was sent off for tripping Mbappe, who was chasing a through ball from Angel di Maria. Brazil defender Marquinhos equalized by heading home the subsequent free kick taken by Messi.

Despite its numerical superiority, PSG struggled to find the winning goal. Green denied Neymar in the 69th and Messi failed to convert the rebound.

PSG eventually took the lead in the 79th when Messi found Di Maria, who curled into the far corner. In stoppage time, Messi crossed for Marquinhos, who outjumped Miguel Trauco to head in.

The game also featured the debut of Sergio Ramos, who recovered from injury to make his first appearance in the French league for PSG.

“I’m very happy and satisfied,” Sergio Ramos told the club’s website. “It’s a very special day for me after having spent so much time without playing. It’s important for me to have helped the team, to be here with the squad and to have played 90 minutes.”

Also Sunday, Rennes extended its unbeaten run to 13 games in all competitions to snatch second place in the league with a 2-0 win at Lorient. Gaetan Laborde notched his ninth league goal with a chip in the 75th before substitute Jeremy Doku doubled the lead with a curling shot in the 78th.

Marseille beat Troyes 1-0 to climb to fourth, level on points with third-place Nice. Spanish midfielder Pol Lirola overcame the offside trap to beat Troyes goalkeeper Gauthier Gallon in the 74th. The game was played behind closed doors after the league sanctioned Marseille for incidents at Stade Velodrome on Oct. 24 when supporters threw projectiles at PSG players.

Marseille midfielder Dimitri Payet started the game a week after he was hit on the head at Lyon with a bottle filled with water which had been thrown from the stands.

In the race for Europe, Monaco and Strasbourg drew 1-1 to trail fourth place by six points. France international Wissam Ben Yedder put Monaco ahead with a penalty on the stroke of halftime. Strasbourg forward Ludovic Ajorque equalized in the 48th with a penalty of his own.

Brest earned a fourth straight win by rallying past lowly Bordeaux 2-1. Jeremy Le Douaron scored twice in the second half after Bordeaux defender Stian Gregersen opened the scoring in the 43rd.

On Saturday, Metz stunned Nice 1-0 while the hopes of defending champion Lille to get back in the race for European spots took a blow after drawing with midtable Nantes 1-1.

On Friday, Lens drew with Angers 2-2 and is now fifth.

Gouiri delivers for Nice; Messi back as PSG routs Reims