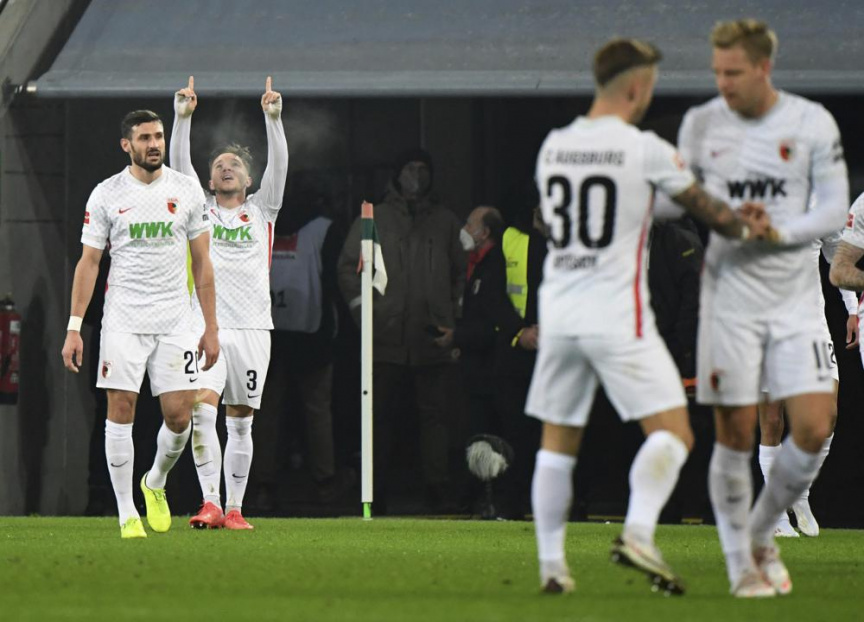 Augsburg held on to stun the Bundesliga leader with a 2-1 win in their Bavarian derby Friday to climb out of the relegation zone.

It was only Augsburg’s third win in 21 league games against its powerful southeastern neighbor, which fell to its second defeat of the season. Bayern had won 16 of their previous 20 meetings.

“For us, this is of course a bitter setback in how we see ourselves, how we actually want to play the games,” Thomas Müller said after his 600th competitive game for Bayern “We need that every match, this confirmation that we’re the ones who dictate and dominate the games. And that doesn’t mean ball possession, but the way and manner in which you play on an opponent.”

It was clear that Bayern missed Joshua Kimmich’s presence in midfield. The unvaccinated 26-year-old is in quarantine for the second time in as many weeks after coming into contact with someone with COVID-19. Bayern was also without Niklas Süle and Josip Stanišić, who tested positive for COVID-19. Augsburg was without winger Rubén Vargas for the same reason.

It was the first time since the coronavirus pandemic started that Augsburg was allowed play in a full stadium. It was also the last time for at least a few weeks as new restrictions are coming into place in Bavaria on Tuesday limiting capacity to 25% until Dec. 15. Bavaria is being hit hard by Germany’s fourth wave of infections.

Augsburg started with intent, playing at pace and not allowing the visitors any time to settle. The home team challenged for every ball and forced Bayern’s stars into mistakes.

Mads Pedersen got the deserved opener in the 23rd minute when he let fly inside the far corner after Lucas Hernandez could only deflect a cross into his path.

The home fans were celebrating again in the 35th, when André Hahn met Iago Amaral Borduchi’s cross with a thumping header past Manuel Neuer after Marcel Sabitzer lost the ball in midfield.

But Lewandowski pulled one back almost immediately afterward, set up by Müller. It was the Poland star’s 14th goal in 12 league games this season.

“The first half was bad, really bad,” Müller said. “And in the second, you could see that we really wanted to turn it around. But perhaps we didn’t deserve this bit of luck in front of goal due to the first half.”

Augsburg’s intensity dropped somewhat in the second half, when Lewandowski fired a good chance over.

Bayern coach Julian Nagelsmann brought on Jamal Musiala and Alphonso Davies in the 52nd to give his team more attacking threat, then Eric Maxim Choupo-Moting for the final 20 minutes.

But his team missed other chances to equalize even as Augsburg dropped further back, and Borussia Dortmund can cut Bayern’s lead to a point if it manages to beat Stuttgart at home on Saturday.

Leverkusen collapses in 5-2 loss at Frankfurt