Migrants aided by Belarus try to storm border into Poland 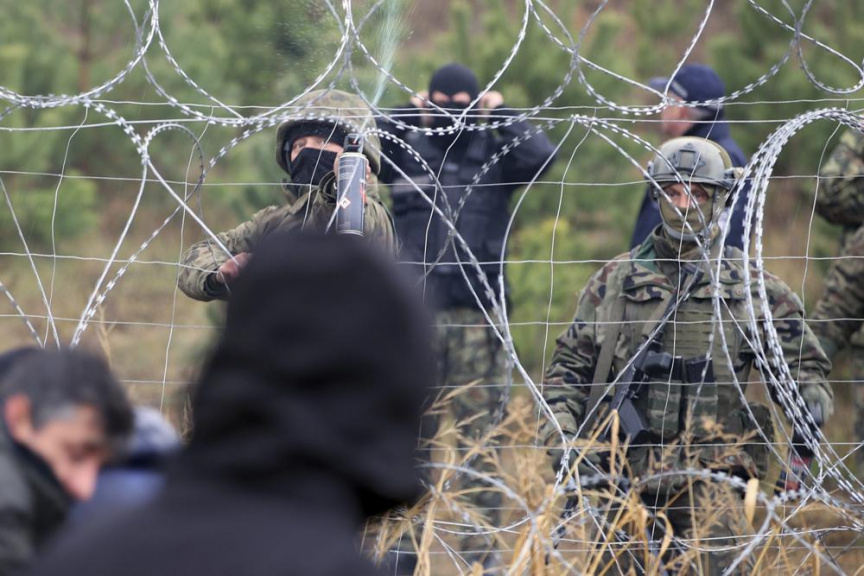 Polish border guards stand near the barbed wire as migrants from the Middle East and elsewhere gather at the Belarus-Poland border near Grodno, Belarus, Monday, Nov. 8, 2021. (Leonid Shcheglov/BelTA via AP)

WARSAW, Poland (AP) — Hundreds if not thousands of migrants sought to storm the border from Belarus into Poland on Monday, cutting razor wire fences and using branches to try and climb over them. The siege escalated a crisis along the European Union’s eastern border that has been simmering for months.

Poland’s interior ministry said it had rebuffed the illegal invasion and claimed the situation was under control. The Defense Ministry posted a video showing an armed Polish officer using a chemical spray through a fence at men who were trying to cut the razor wire. Some migrants threw objects at police. Video footage from Belarusian media showed people using long wooden poles or branches to try to get past a border fence as police helicopters circled overhead.

Defense Ministry video taken later Monday showed the migrants settling in for the night by the border, having put up scores of tents and cooking meals.

“A coordinated attempt to massively enter the territory of the Republic of Poland by migrants used by Belarus for the hybrid attacks against Poland has just begun,” a spokesman for Poland’s security forces, Stanislaw Zaryn, said in a statement.

Noting that it’s also NATO’s eastern border, Zaryn stressed that the “large groups of migrants ... are fully controlled by the Belarusian security services and army.” He accused Belarusian President Alexander Lukashenko of acting to destabilize Poland and other EU countries to pressure the bloc into dropping its sanctions on Minsk. Those sanctions were put into place after Belarus cracked down brutally on democracy protests.

Piotr Mueller, Poland’s government spokesperson, said 3,000 to 4,000 migrants were next to the Polish border on the Belarusian side.

Polish border officials said the border crossing in Kuznica, in the northeast, will be closed early Tuesday.

There was no way to independently verify what was happening. Journalists have limited ability to operate in Belarus and a state of emergency in Poland is keeping reporters and human rights workers out of the border area.

The massing of people at the border appeared to rev up the crisis that has being going on for months in which the autocratic regime of Belarus has encouraged migrants from the Mideast and elsewhere to illegally enter the European Union, at first through Lithuania and Latvia and now primarily through Poland.

Anton Bychkovsky, spokesman for Belarus’ State Border Guard Committee, told The Associated Press that the migrants at the border are seeking to “exercise their right to apply for refugee status in the EU.” Bychkovsky insisted they “are not a security threat.”

But the massive group was viewed as a threat by Poland and other European countries, including Germany — the main destination for many. Steffen Seibert, German Chancellor Angela Merkel’s spokesman, told reporters Monday that “the Belarusian regime is acting as a human trafficker.”

She said two top EU officials — EU Commission vice president Margaritis Schinas and EU foreign affairs chief Josep Borrell — will travel to the main countries of origin for the migrants to “ensure that they act to prevent their own nationals from falling into the trap set by the Belarusian authorities.”

The EU said it hoped that Poland would finally accept help from Frontex, the bloc’s border agency, a step that Poland’s ruling nationalists have so far refused to do. Frontex would not comment Monday on the border situation.

In Washington, U.S. State Department spokesman Ned Price expressed concern “with disturbing images and reports emanating from the Belarus-Poland border” and stressed that the U.S. “strongly condemns the Lukashenko regime’s political exploitation and coercion of vulnerable people and the regime’s callous and inhumane facilitation of irregular migration flows across its borders.”

He said the U.S. was calling on “the regime to immediately halt its campaign of orchestrating and coercing irregular migrant flows across its borders into Europe” and warned that if the regime “refuses to respect its international obligations and commitments ... we will continue to pressure Lukashenko and will not lessen our calls for accountability.”

Polish Defense Minister Mariusz Blaszczak said on Twitter that more than 12,000 soldiers have been deployed to the border and a volunteer Territorial Defense force was put on alert. He also posted video footage of what appeared to be a large group of migrants in Belarus, near Kuznica.

Polish ministers held an emergency meeting on the border crisis, with Prime Minister Mateusz Morawiecki writing on Facebook that Poland’s border is “sacred” and “not just a line on the map.”

Poland’s deputy foreign minister, Pawel Jablonski held talks with Iraqi charge d’affaires Hussein al-Safi on ways of ending the migration crisis and thanked Iraq for having Belarus close its consulates in Baghdad and Irbil that were giving tourist visas to migrants.

Meanwhile, in Poland’s EU neighbor Lithuania, officials were preparing for the possibility of a similar incursion, with the Interior Ministry proposing to declare an emergency situation.

“We are getting ready for all possible scenarios,” said Rustamas Liubajevas, the head of Lithuania’s border guards.

Since the summer, Poland and Lithuania have seen thousands of migrants from the Mideast and Africa trying to cross into the EU. Poland has sought to block the attempts or send those they catch back into Belarus.

Belarusian political analyst Valery Karbalevich told the AP that the Moscow-backed Lukashenko regime seemed to be trying to use the migrants “to scare” the EU.

“The largest attack of migrants on EU borders is taking place three days after Belarus and Russia signed a new agreement on military cooperation. The Kremlin is at least aware of the details of what’s happening,” Karbalevich said.

Poland gears to accept Ukrain refugees in case of war