President Solih: Maldives will cease to exist by the end of this century if climate change worsens 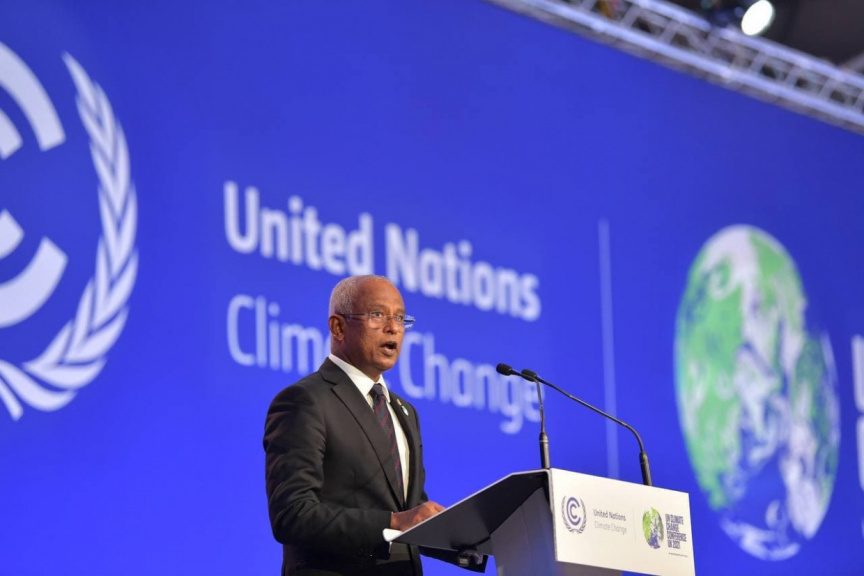 President Ibrahim Mohamed Solih has stated that Maldives will cease to exist by the end of this century if the impacts of climate change that the Maldivian islands are already facing continues as it is.

President Solih has remarked this whilst delivering the national statement at the 2021 United Nations Climate Change Conference of the Parties (COP26) World Leaders Summit.

Speaking to world leaders and dignitaries present at the summit – President Solih revealed the grim lived realities of Maldivians already due to climate change. One of such he highlighted in this regard is the report of severe erosion at different islands of Maldives which he has visited over the past month.

“If the rise in temperature remains unchecked at 1.5 and jumps to 2 degrees; that is a death sentence to the Maldives. In a world where we cease to exist, our fate would remain a dark omen of the grim future that awaits the rest of the world. My people are determined not to let this transpire. We are determined to be part of global solutions to reverse these trends, to change the status quo,” he had said.

President Solih also said that just making climate commitments is not enough. On this note – he stressed in the importance of upholding the pledges made.

“As a leader of a small island state, I have stepped up to many fora to say the exact same things I am about to say now. But because of the gravity of the situation, because our existence is at stake, I have no choice but to keep on repeating it,” he added.

He further cited that Maldives has always been referred to as one of low-lying countries that could disappear off the map because of the climate crisis.

President Solih also pointed out that climate emergency cannot be solved by the actions of individual nations alone – calling out major emitters to step up their efforts to make more ambitious climate commitments. He also appealed to world leaders to agree on stringent accountability measures to ensure that commitments on climate finance are met for vulnerable countries like Maldives to stand a chance of survival.

“Countries must band together and assist the most climate-vulnerable states to adapt to climate change,” he also said.

In concluding his statement – President Solih underscored that this may the last chance the world has to get ahead of climate change; urging them to let this opportunity go to waste.