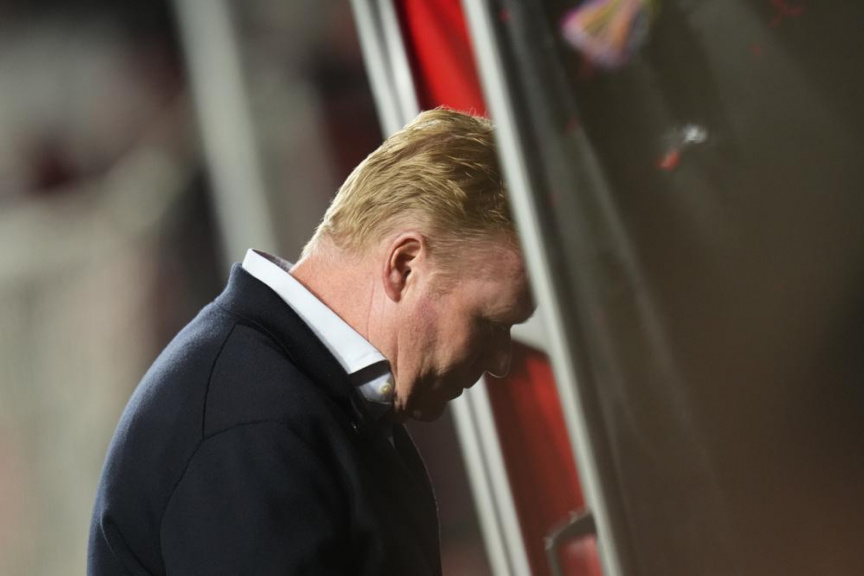 Barcelona's head coach Ronald Koeman heads back down the tunnel at half time during a Spanish La Liga soccer match between Rayo Vallecano and FC Barcelona at the Vallecas stadium in Madrid, Spain, Wednesday, Oct. 27, 2021. (AP Photo/Manu Fernandez)

MADRID (AP) — Draws by Real Madrid and Sevilla left four teams tied for the lead in the Spanish league. Another Barcelona loss left coach Ronald Koeman out of a job.

The Catalan club fired Koeman shortly after the team’s 1-0 loss at Rayo Vallecano on Wednesday, three days after a a 2-1 home defeat to rival Madrid in the “clásico” at the Camp Nou Stadium.

Barcelona’s fifth league loss of the season left it winless in away matches and only ninth in the standings with 15 points from 10 games. Barcelona had not gone five consecutive away matches without a win in nearly 20 years.

Club president Joan Laporta informed Koeman of his decision after the loss, and Xavi Hernández became the favorite to take over the club in its first season without Lionel Messi in nearly two decades.

Barcelona said Koeman “will say goodbye to the squad on Thursday.”

Madrid was held 0-0 by Osasuna at home, while Sevilla couldn’t manage more than a 1-1 result at Mallorca, missing its chance to take sole possession of the lead. Real Betis joined them at the top with a 4-1 win over Valencia. Sociedad, which visits Celta Vigo on Thursday, also has 21 points atop the standings.

“We wanted to take advantage that Barcelona lost and Sevilla drew, but it wasn’t possible,” Madrid defender Dani Carvajal said. “We tried everything but the ball wouldn’t go in.”

Veteran striker Radamel Falcao scored Rayo’s winner against Barcelona in the first half.

It was the fifth straight home win for promoted Rayo, which moved to fifth place with 19 points, two from the lead. It hadn’t beaten Barcelona at home in nearly two decades.

“This victory means a lot to us,” said Falcao, who had not defeated Barcelona while he played for rival Atlético Madrid in the early 2010s. “We are glad that we are giving our fans a chance to enjoy something they had never been able to enjoy before.”

“This is what has been happening to us during most of the season,” Barcelona midfielder Sergio Busquets said. “We are missing a little bit of everything. We need a little bit more luck, belief, concentration, to make less mistakes...”

In the duel between veteran strikers, Falcao got the best of Sergio Aguero, who made his first start with Barcelona since arriving from Manchester City.

The 35-year-old Falcao opened the scoring in the 30th minute in a breakaway that started after Busquets lost possession near midfield. The Colombia veteran entered the area and got past defender Gerard Piqué with a cut-back move before sending his low shot into the far corner for his fourth goal since joining the Madrid club this season.

“This is what I’m here for, to contribute with my goals,” said Falcao, who returned to Spain this season after playing for Turkish club Galatasaray.

The 33-year-old Aguero had a few good chances in front of the net but failed to capitalize as Barcelona’s attack struggled as a whole. One of Aguero’s best opportunities was a close-range header that just missed deep into second-half stoppage time.

Depay’s penalty came in the 72nd after he was fouled inside the area.

Barcelona had won back-to-back games in all competitions before losing 2-1 to Madrid on Sunday. It had won its last 13 matches against Rayo in the league.

Madrid was in control from the start at the Santiago Bernabéu Stadium but couldn’t capitalize on its opportunities against sixth-place Osasuna, which had won four of its last six matches.

Karim Benzema had one of the best chances for the hosts when his shot from close range hit the crossbar in the second half.

It was the third straight home game without a win for Madrid in all competitions.

Borja Iglesias scored twice as Betis defeated Valencia to join the group of teams with 21 points.

It was the third straight league win for the team coached by Manuel Pellegrini.

Antonio Sánchez opened the scoring for Mallorca in the first half and Erik Lamela equalized for visiting Sevilla after halftime.

Julen Lopetegui’s Sevilla had won four of its last five league matches, including two in a row.