President: Room to collaborate with international experts for promotion of Blue Economy 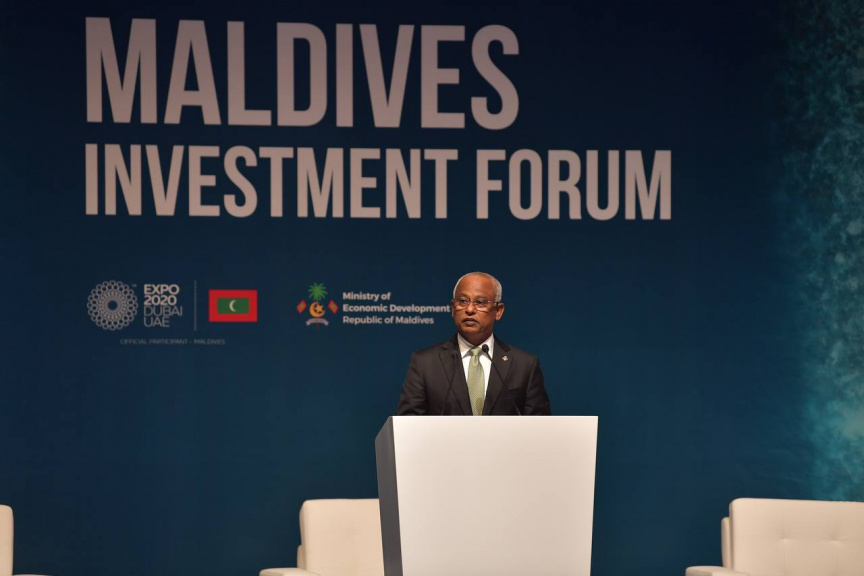 Stressing that promotion of a ‘Blue Economy’ is of utmost importance for the Maldives – President Ibrahim Mohamed Solih has stated that there is much room to collaborate with international experts to accrue mutual benefits in this avenue.

President Solih had remarked this whilst delivering the keynote address at the Maldives Investment Forum held today in Dubai.

In his keynote, President Solih said that the government’s topmost priorities lie in fostering economic growth through sectoral diversification, environmental sustainability and the prosperity of the Maldivian societies.

Underscoring that 99 percent of the Maldivian territory comprises of the ocean – President Solih said that Maldivians have always been dependent on the sea for their livelihood and sustenance.  Adding that the sustainable and effective utilization of its vast marine resources being of utmost importance for Maldivians – he said that a Blue Economy’ is an integral component for the government’s economic policy frame

In this regard, President Solih stressed that there was much room to collaborate with international export to accrue the mutual benefits of promoting a ‘Blue Economy’.

President Solih also talked about the ambitious goal of Maldives to achieve attain net-zero carbon emissions by 2030 – stressing that this can only be achieved through generous support and assistance from the international community.

Speaking further – he also highlighted the efforts underway to curb the spread of COVID-19 in the Maldives. In this regard, he said that 93 percent of resort workers and 73 percent of the eligible population in the Maldives have been fully vaccinated.

In concluding the keynote – President Solih invited investors to explore untapped investment potential that Maldives has to offer.

Suspect in assault on DhiFM ex-CEO jailed til trial end