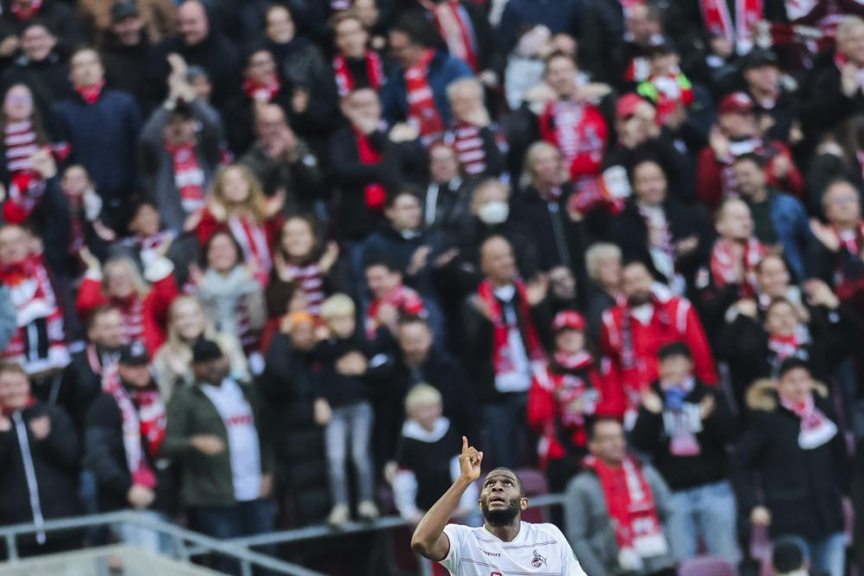 COLOGNE, Germany (AP) — Anthony Modeste scored twice to salvage a 2-2 draw for Cologne against Bayer Leverkusen in the Bundesliga on Sunday and further dent the title hopes of a Leverkusen team already reeling from a heavy defeat to defending champion Bayern Munich.

Two goals in as many minutes from Patrik Schick and Karim Bellarabi gave Leverkusen the lead before Modeste’s goals for Leverkusen.

Leverkusen stays fourth in the Bundesliga after Freiburg overtook Leverkusen to go third with a 2-0 win over Wolfsburg on Saturday. Leverkusen lost 5-1 at home to Bayern last week with two goals apiece for Robert Lewandowski and Serge Gnabry, in a result which underlined Bayern’s status as favorite to win a 10th consecutive title.

Czech striker Schick scored Sunday for the third straight league game with a first-time shot off Moussa Diaby’s through ball in the 15th, and Bellarabi doubled the advantage soon after.

Modeste lost his marker to score from a cross at the far post with half an hour to go and leveled the game in the 82nd minute when a long throw was flicked on.

Ten-man Stuttgart scored a last-minute equalizer to rescue a 1-1 draw with Union Berlin. Taiwo Awoniyi’s sixth goal of the season put Union ahead before Stuttgart had Atakan Karazor sent off for two separate fouls and bookings in the space of 35 seconds.

On a day when Wolfsburg fired coach Mark van Bommel after an eight-game winless run, the pressure on Eintracht Frankfurt coach Oliver Glasner increased with a 2-0 loss at promoted Bochum.

Danny Blum’s third-minute goal put Bochum on course for its third win since returning to the top division, and goalkeeper Manuel Riemann saved Stuttgart forward Goncalo Paciencia’s penalty, awarded for a handball. Bochum missed a series of chances to score and Frankfurt’s Daichi Kamada hit the woodwork late on before Sebastian Polter got Bochum’s second goal on a rebound in added time.

Frankfurt is 15th, one place below Bochum, and has won just one of nine Bundesliga games since hiring Glasner from Wolfsburg in the off-season. The only victory was an eye-catching 2-1 win over Bayern. Frankfurt leads its Europa League group.

Union beats Leipzig 2-1 to climb to 4th in Bundesliga

Dybala returns to rescue Juventus in 1-1 draw at Inter