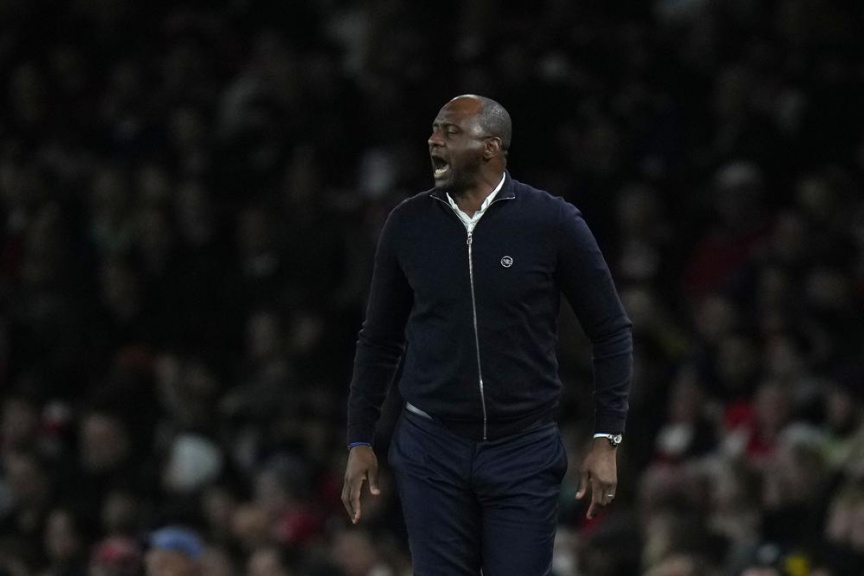 Vieira was back this time as Crystal Palace manager and his team was just about to beat the Gunners at Emirates Stadium.

But Arsenal substitute Alexandre Lacazette made sure that wouldn’t happen. He scored a dramatic late equalizer and the match finished 2-2 in the English Premier League on Monday.

The visitors were leading deep into injury time before Lacazette managed to turn home a rebound in the fifth minute of added time. The forward ran over to celebrate with Arsenal fans.

Vieira’s return to the club where he brought glory to Arsenal as captain ended in misery, with the Frenchman crouching down and pounding the turf.

Vieira was appointed manager of Crystal Palace in July and he has tried to bring attacking football to the club. But, so far, Palace has won only once out of eight matches despite impressing with his expansive approach and the team’s pressing.

Palace came from behind to score twice in the second half after Arsenal took the lead through captain Pierre-Emerick Aubameyang in the eighth minute.

Vieira wouldn’t have been impressed by the Arsenal defensive midfielders playing in his former position, Thomas Partey and substitute Albert Sambi Lokonga, whose mistakes led to both Palace goals.

Partey first lost possession cheaply in the 50th minute when striker Jordan Ayew stripped him of the ball. Palace striker Christian Benteke collected and cut inside before smashing past goalkeeper Aaron Ramsdale.

Then it was Lokonga’s turn to lose the ball, which eventually made its way to Odsonne Edouard. The Palace forward calmly stroked the ball home.

“It was a strange game,” Arsenal manager Mikel Arteta said. “We dominated in the beginning. We deserved the goal and after that we lacked composure, belief and maturity. We gave a lot of balls away.”

The result meant Arsenal was in 12th place in the table, and Palace 14th.

Vieira’s spirit and desire to win enamored him with Arsenal fans during his spell at the club. The home supporters serenaded him in appreciation before and after the match.

“It was really nice,” he said. “I thank the Arsenal fans for the reception.”

But Vieira, while happy to receive chants in his name, was clearly here to win.

“We have to learn from the games we played previously,” he said. “I’m really disappointed because the players deserved to win the game. I’m really frustrated. We’re learning in a really harsh way.”

Vieira signed a contract until 2024 as the replacement for Roy Hodgson, who stepped down at the end of last season after four years in charge of the south London club.

As a player, Vieira was best known at club level for his nine seasons with Arsenal under Arsene Wenger from 1996-2005. He helped the team win three Premier League titles, including captaining “The Invincibles” in an unprecedented unbeaten league campaign in 2003-04. Vieira also won four FA Cups with Arsenal.

He was a solid presence as a towering box-to-box midfielder, who protected the back line but also propelled forward to boost Arsenal’s attack. When he and other key players started departing the club, Arsenal’s glory days soon became a thing of the past. The Gunners have struggled to find a dominating midfielder in his mold and haven’t won the league since that famous title in 2004.

Madrid forward Benzema on trial in France for blackmail