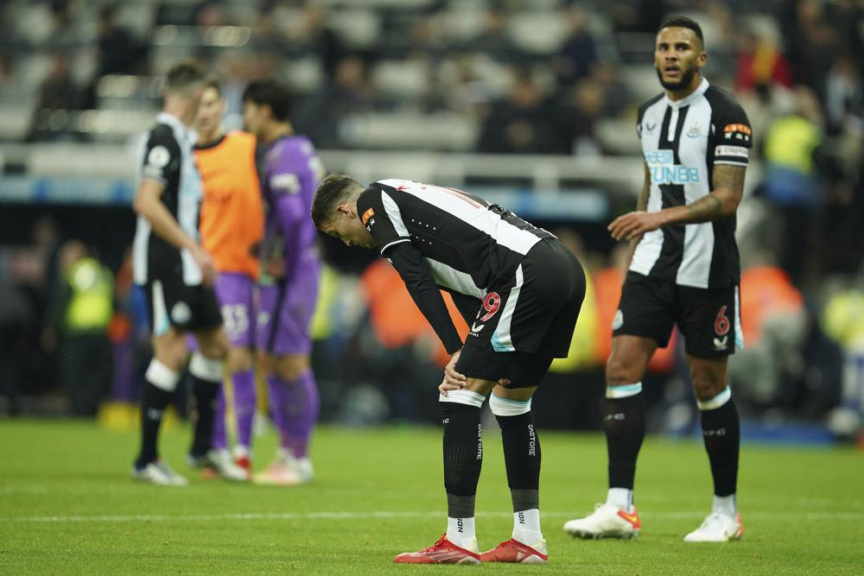 NEWCASTLE, England (AP) — Newcastle will have to get used to the taunts they faced from Tottenham fans.

“No noise from the Saudi boys,” they chanted at St. James’ Park.

The celebratory noise quickly faded Sunday from the supporter base now directly associated with the Saudi state since the buyout 11 days earlier.

A day which started perfectly for Newcastle, with the new ownership announced to a excitable crowd and Callum Wilson scoring after 107 seconds, ended so familiarly.

Three goals conceded before halftime — after a 20-minute suspension of the game for a fan illness — and a 3-2 loss.

It left Newcastle with only three points from eight games to remain next-to-last in the Premier League and no ability for the Saudi sovereign wealth fund to be used to attract squad reinforcements until the January transfer window opens.

The change that can be made before then is in the dugout. Steve Bruce was kept to mark 1,000 games in management — a landmark not acknowledged in the introduction of players before kickoff — but his days in charge seem to be dwindling.

Usually the chant of opposition fans, even the Newcastle support was singing “you’re getting sacked in the morning” to Bruce.

Bruce knew the inability to hold onto the lead secured by Wilson’s header will have alarmed new ownership fronted by non-executive chairman Yasir Al-Rumayyan, who sits as governor on the Public Investment Fund chaired by Saudi Arabia’s crown prince.

“It’s pretty obvious we haven’t defended well enough,” Bruce said. “Unfortunately we have done that a bit too often this season for my liking.”

The collapse began in the 17th minute when Tanguy Ndombele struck the equalizer, then Harry Kane lifted the ball over goalkeeper Karl Darlow five minutes later for his first league goal of the season and Son Heung-min slid in for the third in first-half stoppage time.

Despite Newcastle being reduced to 10 men when Jonjo Shelvey was sent off with seven minutes left, fifth-place Tottenham gave Newcastle a flicker of a hope of a comeback when Eric Dier headed into his own goal in the 89th but it came too late.

Whether Bruce’s 1,001st game as a manager is with Newcastle at Crystal Palace on Saturday is unclear.

“That is for other people to decide,” he said. “If I was reading everything or seeing everything last week, I may not have been here today but my job is to get results.

“If you have not won in seven or eight you come under pressure and that is the Premier League. It is a big league for big boys and I will carry on the best I can until told otherwise. Every football club needs clarity. The new owners have been very respectful and I cannot say enough of how they have gone about their business in the past 10 days.”

Both teams have 14 points from eight games, five points fewer than leader Chelsea.