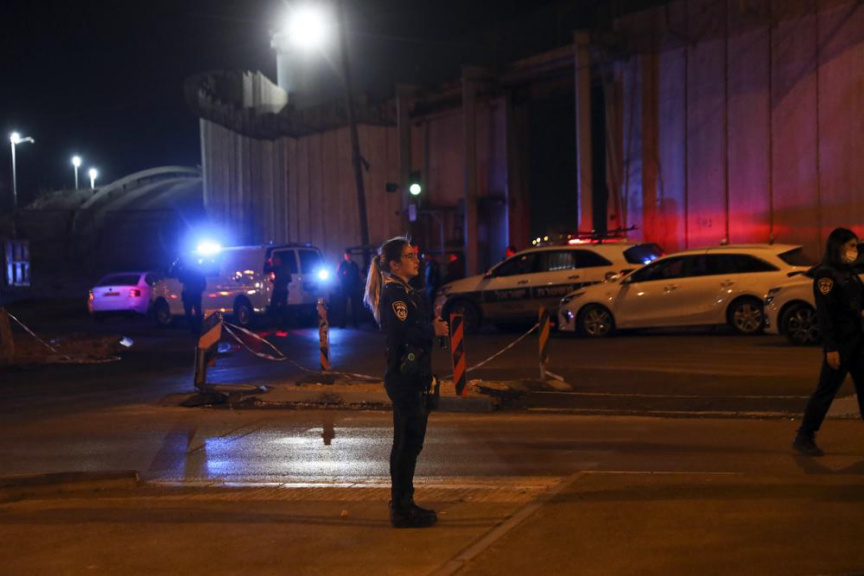 Israeli police examine the scene of a car-ramming attack at the Qalandia checkpoint between Jerusalem and the West Bank city of Ramallah, Thursday, Oct. 14, 2021. (AP Photo/Mahmoud Illean)

JERUSALEM (AP) — The Israeli military on Thursday said that troops shot and killed a Palestinian who was throwing firebombs at cars on a main highway in the occupied West Bank.

A military statement said that soldiers opened fire at two suspects spotted throwing firebombs near Beit Jala, a Palestinian town south of Jerusalem. It said one of the suspects was hit and died of his wounds, while the second was detained.

The incident occurred along a main highway used by Israeli residents of nearby West Bank settlements.

There were no immediate details from Palestinian officials on the incident.

They said officers fired on the vehicle, causing it to crash into a wall, and arrested the suspect, a 22-year-old from the town of Qalqilya in the occupied West Bank. The police said it was a car-ramming attack.

Palestinians have carried out dozens of stabbing, shooting and vehicular attacks in recent years, but Palestinians and rights groups say some of the alleged car-rammings were accidents and accuse Israel of using excessive force.

In a separate incident, a Jewish settler attacked an Israeli military officer and a soldier with pepper spray near a settlement outpost, the latest in a series of recent attacks by settlers on Israeli security forces and Palestinians in the West Bank.

The military said the two soldiers received medical treatment at the scene, without elaborating. It declined to say whether anyone was arrested, referring questions to police, who did not respond to a request for comment.

Hard-line settlers have clashed with Israeli troops and vandalized Palestinian property in recent days in what are known as “price-tag” attacks in response to perceived efforts by Israeli authorities to restrict settlement expansion.

Most of the nearly 500,000 Israeli settlers in the West Bank live in authorized settlements that resemble small towns and suburbs, but more radical settlers have set up dozens of outposts that are illegal even under Israeli law. The Palestinians and most of the international community view all settlements as illegal and an obstacle to a two-state solution to the conflict.

At a military ceremony Thursday, Maj. Gen. Yehuda Fuchs, the head of Israel’s Central Command, which includes the West Bank, criticized the settler violence, saying it undermines the mission of battling Palestinian militants.

“The recent attacks on the security forces by Israeli civilians constitute criminal and serious conduct, worthy of all condemnation,” he said at the ceremony.

The more than 2.5 million Palestinians in the occupied West Bank live under Israeli military rule, with the Palestinian Authority having limited autonomy in cities and towns. The settlers have Israeli citizenship and are subject to Israel’s civilian justice system.

Bow-and-arrow killings in Norway seen as a terror act