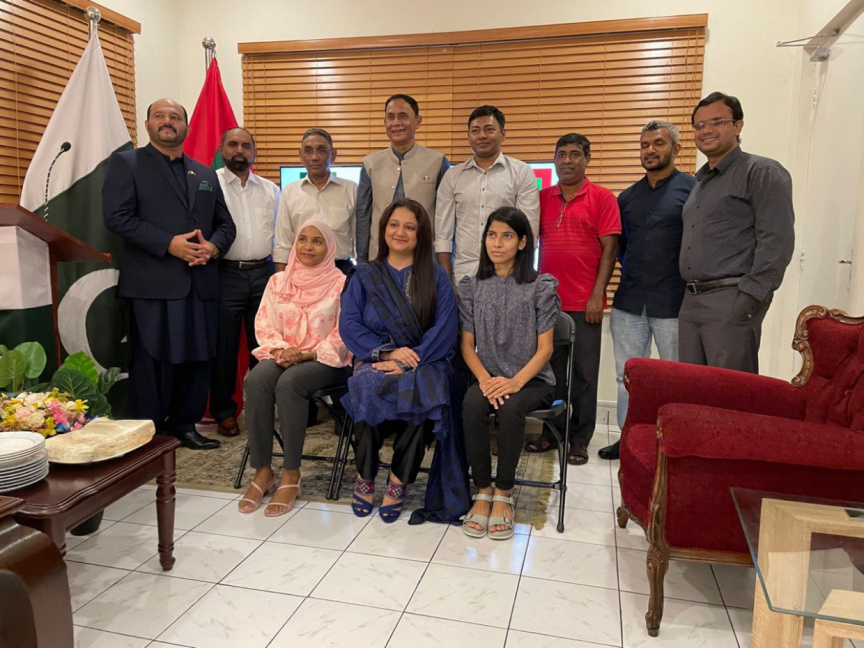 A capture from the Annual General Meeting of Pakistan Maldives Friendship Association held on October 13, 2021. (Photo/High Commission of Pakistan in Maldives)

A new president has been appointed to Pakistan Maldives Friendship Association (PMFA) – a registered organization in the Maldives to promote friendship, culture, education and sports exchange between the Pakistani and Maldivian communities.

New members were appointed to the association during its Annual General Meeting held yesterday at the High Commission of Pakistan in Maldives.

In this meeting – the individual elected as the new President of the association is Masood Imad. Meanwhile, Hamdhoon Rasheed, Muhammad Tariq and Ammarah Murk were elected as vice presidents.

Members were also elected to other significant posts. They are:

All members were elected for a term of five years.

Newly elected President of PMFA Masood Imad spoke at the meeting – where he affirmed the commitment to work alongside all other members to further enhance relations between the Pakistani and Maldivian communities in addition to promoting friendship, culture, education and sports exchange for mutual benefits. He also noted that Maldivian youth have great potential and talent – stressing the need to facilitate them the best educational and sports opportunities.

High Commissioner Ather Mukhtar also spoke at the ceremony. He congratulated all the newly elected members – adding that he trusts that with team spirit, they would be able to undertake various activities for the mutual benefit of both communities.

Underscoring that this year is celebrated as the 55th year since the establishment of diplomatic relations between Pakistan and Maldives – the High Commissioner said that the exemplary relations were based on common faith, culture, historic links, trust, and mutual respect.

Deputy High Commissioner Zulqurnain Ahmad also spoke at the meeting – where he highly commended and expressed his appreciation over the willingness of the members to volunteer their time and efforts to PMFA. He also added that the passion and devotion of the members are assets that will aid greatly in achieving the objectives of the association.

In addition to this, he also highlighted the importance of such a platform to boost people-to-people contacts and help in enhancing the existing relations between the two communities. On this note – he gave assurance to cooperate with the association in its endeavors.