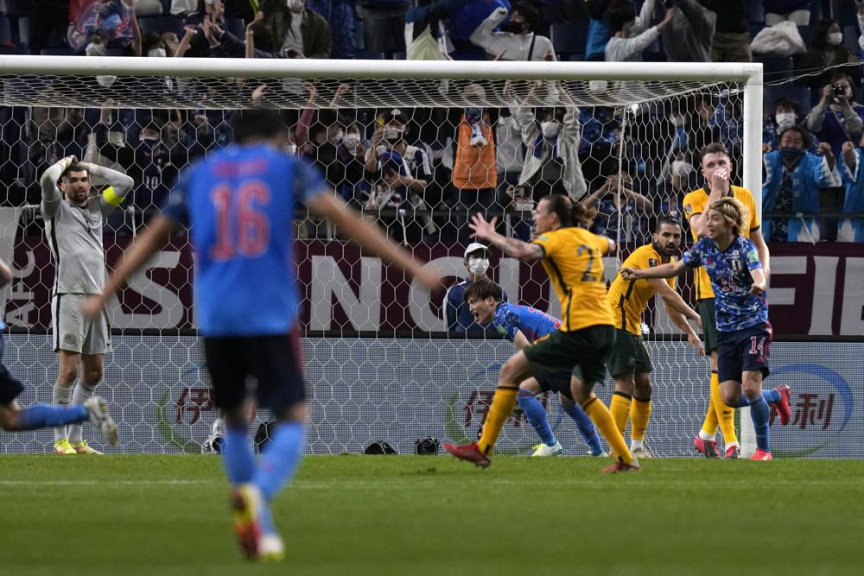 SEOUL, South Korea (AP) — An Australian own-goal kept Japan in the race for an automatic spot in next year’s World Cup.

Australia defender Aziz Behich put the ball into his own net in the 85th minute Tuesday to give Japan a 2-1 victory and six points from four matches in Group B, three points behind the Aussies and six behind Saudi Arabia.

Goalkeeper Mat Ryan tipped a shot from Takuma Asano and the ball bounced off the post and then ricocheted off Behich and into the net, ending Australia’s run of 11 consecutive wins in World Cup qualifying games.

“We kept fighting until the end and never gave up,” Japan coach Hajime Moriyasu said. “We showed our determination to get to the World Cup.”

Only the top two teams from each of the two six-team groups will automatically qualify for the tournament in Qatar.

“Both teams had a go at each other,” Australia coach Graham Arnold said. “We were unlucky that we hit the post but ... it wasn’t meant to be. ”

Australia was awarded a penalty kick midway through the second half when Hidemasa Morita brought down Hrustic on the edge of the area. But before Martin Boyle could take the kick, referee Abdulrahman Al-Jassim of Qatar reversed the call after a video review, ruling that the challenge had taken place just outside the box.

Japan is seeking a seventh straight World Cup appearance. Australia has appeared at every World Cup since 2006.

“It was a great win for us but there are still a lot of difficult games to come,” Moriyasu said. “We have to make sure we build on this win.”

Saudi Arabia beat fifth-place China 3-2 in Jeddah to record a fourth straight win and go three points clear at the top. In the group’s other game, Oman rallied to beat Vietnam 3-1 and go third, above Japan by virtue of scoring more goals.

Australia and Saudi Arabia will meet on Nov. 11, when Japan is away at Vietnam.

In Group A, Iran and South Korea drew 1-1 in an empty stadium in Tehran.

Son Heung-min gave South Korea the lead early in the second half, running onto a through ball to curl a shot around the goalkeeper. With 14 minutes remaining, an Alireza Jahanbakhsh header allowed Iran to equalize and remain on top of the standings. Iran has 10 points, two more than second-place South Korea.

Lebanon is third with five points after a 3-2 win over Syria. In a meeting of Dutch coaches, Bert van Marwijk’s United Arab Emirates lineup was held to a 2-2 draw by Dick Advocaat’s Iraq in Dubai, a result that leaves both teams on three points, two ahead of Syria.